On 3 April 2013, the People’s Daily published a commentary on the violent death of two protesting farmers in Henan, crushed in two separate incidents by vehicles used to clear their land for development. ‘Besides the open questions about the administrative violations,’ wrote the author, ‘there remain other things to be asked: has the expropriation followed the appropriate procedures? Is it legal to build a hotel or any permanent structure on basic agricultural land? And if there are problems, who is going to evaluate them, who is taking responsibility?’ For people to feel that they have obtained justice, the article argued, ‘the greatest efforts should be made to protect the life of every citizen’. These episodes were followed just a few days later by a major incident in which 300 employees of Bureau No.13 of the Ministry of Railways attacked farmers who were picketing land earmarked for expropriation.

At times, such violence is perpetrated by government departments through local gangsters and in the name of progress and stability. Many such conflicts emerge in the process of land conversion from agricultural use (nongdi 农地) to ‘construction land’ (jianshe tudi 建设土地). Given the great uncertainties surrounding the regime of land use rights, this has today become the single most explosive and confronting issue for local governments in China. About sixty-five percent of all ‘mass incidents’ are land-related. According to the legal expert Yu Jianrong’s estimates, over the last two decades, local governments have seized 14.7 million hectares of land, and the difference between official compensation and market prices has short-changed farmers by over two trillion yuan. All this has happened while the central government has desperately been trying to prevent the area of China’s arable land from falling below the dreaded ‘red line’ of 1.8 billion mu (120 million hectares) — considered the lowest level at which it will be possible to prevent significant food shortages.

The National People’s Congress recently approved an amendment to Article 47 of the Land Management Law to allow increased land compensation for deracinated farmers. The limit of ‘thirty times the original value’ imposed by the law kept compensation from following market value and resulted, according to Jiang Ming — a professor at Peking University — in farmers receiving only, on average, 6.9 percent of the market value of expropriated land.

Over the last six decades, China has experienced repeated land reforms, each defining a different phase of the country’s economic development. The Chinese Communist Party came to power during the first and bloodiest of these reforms — the one that during and after the revolution redistributed land away from landlords and to poor farmers, many of whom had until that time tilled land owned by others. From the early 1950s land was then progressively placed under the control of cooperatives and collectives. The system set in place a bifurcated ownership regime (state-owned land in the cities, collectively owned land in the countryside where village co-operatives retained property rights through the period of the People’s Communes) that is still formally in place today. Under the new conditions, with land transfer necessary for any economic or infrastructural project, it is turning into a major headache for the leadership, which has become increasingly concerned about the conflicts it has ignited. The redistribution of land to households (the second land reform) in the early 1980s had marginally and temporarily boosted agricultural incomes and land efficiencies. But the parcellisation of land use rights that resulted greatly reduced the productivity of land and the quality of agricultural products. Meanwhile, local governments depended on land conversion (and the fees this generated) to balance their budgets and foster economic reform. Still in 2012, despite central policies aimed at slowing down the sale of rural land, the income derived by local government from land fees grew by a staggering 46.6 percent on the previous year! 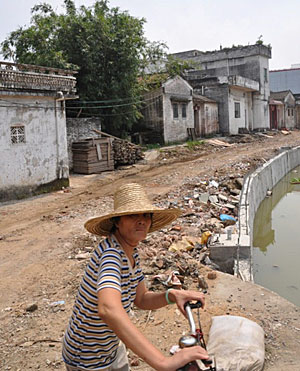 Village land prepared for transfer and development
From 2010, a third land reform has been on the cards and, while discussions rage, local experiments flourish. Since 2003, the Party has produced an annual ‘Document No.1’ (Yihao wenjian 一号文件) devoted to rural reform and the solution of the so-called ‘three rural problems (or issues)’ (sannong wenti 三农问题: agriculture, rural areas and peasants). In 2013, the document that set the tone for rural policy during the year focused on three aspects of this reform: the encouragement of ‘specialised farming households’ (zhuanye nonghu 专业农户); the expansion of rural co-operatives through the corporatisation of collective land in the hands of shareholding companies, inspired by the experiments with corporate collective land first in Guangdong and more recently in other rapidly industrialising areas of the country; and, thirdly, the establishment of ‘family farms’ (jiating nongchang 家庭农产). ‘Family farms’ is a new expression in China’s policy landscape, and it refers to farms where most of the labour is undertaken by family members. Family farms are larger in the scale of their production than traditional households, employ more intensive agricultural practices and are largely commercialised (that is, they produce for the market rather than personal consumption). In initial commentaries on this new policy, such farms are seen as ‘a further evolution of the specialised household’. Families registering to establish larger scale activities will be entitled to preferential policies by the state in terms of land use rights, welfare, financial support and fiscal regimes. It has also been suggested that such ‘bottom up’ development of larger farms will counter the increasing penetration of agribusiness into the Chinese countryside, which public opinion sees as one of the reasons for the increase in food security issues.

While suggesting the need for fairer and clearer procedures in cases of land expropriation, the 2013 Document No.1 did not offer any clues as to whether there would be significant changes to the present land-owning regime. The distinction between collective and state land — which produces conflicts during conversion — and the dependence of local budgets on land fees are the main problems under discussion. A lack of clarity in the registration of use rights remains, despite the land census of the late 1980s and early 1990s, which claimed to have mapped and registered over ninety percent of collective land. The 2013 document suggests that such registration should be completed ‘within five years’. Collectives have often redistributed land among villagers or established corporations to manage collective land, and ‘who owns what’ is still a question few can answer. Needless to say, such uncertainty provides opportunities for land-based elites to emerge and for conflicts to develop.

Some have argued that collective ownership has protected farmers from expropriation, and resulted in significant revenues for them, especially in rapidly urbanising areas like Guangdong. Villages in wealthier and rapidly developing regions of the country have indeed taken advantage of the situation and locked in the growing value of their land — for example, turning some urbanised villages (especially in Guangzhou and Shenzhen) into large land-holding corporations. Others have contended that these are extreme cases — exceptions rather than the rule. In most urbanising areas, farmers have indeed become shareholders, but they have no real control over their assets. Decisions over land use are in the hands of a few, the shares they own cannot be sold, and there is no individual market where they can be used as collateral. Even the houses farmers build on collective land only entitle them to ‘small property rights’ (xiao chanquan 小产权) — a sort of usufruct. In order to acquire full ownership rights, farmers are required to pay the difference between construction costs and market price, which few can afford. Collective ownership, therefore, has locked in some of the value produced by industrialisation. But it has also increasingly alienated farmers from the land, while the land itself, especially in peri-urban areas, is increasingly built up. For some commentators, this amounts to a de facto expropriation, and in many cases the value of the farmers’ shares will continue to decline until they become irrelevant to their livelihood. 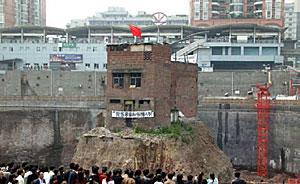 This situation has led to a fragmentation of land policies, where local governments have accepted substantially different arrangements to appease farmers and avoid conflicts. Such complexity is what led some analysts, including Zhou Tianyong of the Central Party School, to suggest doing away with collective land altogether. They would nationalise the countryside and grant long-term leases to farmers, thereby extending to the countryside the model used for urban areas by which land is leased for periods of seventy years. According to this scenario, nationalisation would result in farmers exercising greater control over their land for periods long enough to stimulate investment. Such measures would, however, lead to a collapse of rural local governments that greatly depend on the taxes and fees earned through the conversion of rural land. A fiscal reform is therefore central to such reorganisation, to better redistribute wealth in the fragmented economies of the Chinese countryside. This is especially the case since the abolition of the agricultural tax that left local authorities little alternative to speculation and land grabs to provide services and produce growth.

Nationalisation, however, is not as simple as it sounds, and its supporters have failed to convince policy makers of its merits. It would require a massive transition of land away from collectives. This has until now happened only as case-by-case expropriation, and there is no solid nationwide information on land use rights that can be used as a basis for such transactions. This would be likely to result in massive transaction costs. In a way, this solution would suffer from the same structural problem often identified with the privatisation of land: the lack of a certain base for the distribution of rights.

No clear solution is on the horizon for the massive challenge posed by the inadequacy of the current land regime to the intense exploitation of resources that characterises urbanisation and industrialisation. The increasingly loud public call for ‘returning the land to the farmers’ will, nonetheless, keep pressure on policy makers in the coming years to reduce inequality and violence around land issues.


This essay was first published in Civilising China. The China Story Yearbook 2013, published by The Australian Centre on China in the World, Canberra.
Civilising China is available for free download at http://www.thechinastory.org

Luigi Tomba is affiliated with the Australian Center on China in the World, Australian National University. Co-editor of The China Journal since 2005, he has written on labour politics to community governance and neighbourhood politics. He has published extensively on the consequences of housing reform and the emergence of a new middle class, and practices of urbanization in peri-urban Chinese villages, in particular land management and the consequences for local governance.