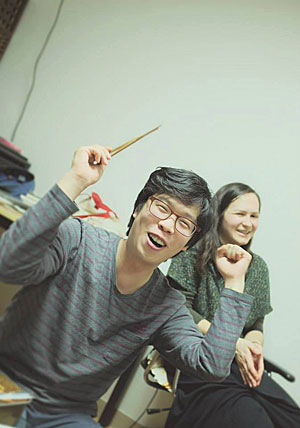 Dear friends,
You are all healthy, right? Out of 30 minutes of news, 15 minutes of it has been talk about MERS. I'm worried about how those living on the outside are doing. Here too because of MERS every event that would bring outsiders here has been canceled. I think they won't be able to hold any religious services here in the time before my release.

I have several bits of news. First, finally next month it looks like I'll be put up on the parole list. Though I knew from the day I came in when I would get out, to hear the finalized decision from the lips of an employee here feels odd. There are 46 days left until July 30 now. Ah, I'm excited and nervous. They say that when you've been in here for over a year, you get motion sickness when you ride in a car. I guess I'll have to experience it for myself.

Secondly, last Thursday (6/4), I moved for the seventh time. Ah, it's tedious..I moved from building 6, bottom floor, room 30 to building 6, middle floor, room 11, but it's a shame to lose the enjoyable view from room 30. The clouds and stars became about 5 meters closer, but that's about it. Ah, why when moving, they said they'd gather together working prisoners like me gather to make a 자치수용동 (group for self-governance?)

So, there isn't even staff, and we even take turns among ourselves keeping night watch. But I am way more tired than before. On top of that, this time it's moving as a "new tenant." I am of course into room that has been unused since the establishment of the Southern Detention Center. I cleaned up dust that has been in there for 3~4 years, oh man was it ever annoying! However, if I look on the bright side, the TV is in a different spot now! In the room I was staying in before, whenever I was lying down, the TV was on the left side, and now it's on the right side of the room. My back that was always bent in one direction will find a new position.

Ah, lastly, a new drama has started. It's a new historical drama called "Splendid Politics." This, for five months in a row I've been watching King Gwanghae. However compared to In Guk Seo's portrayal of Gwanghae, Seungwon Cha is a lot better. Yes, definitely. I couldn't imagine that I would be watching Gwanghae for half a year. Now, there aren't many days left of sending these open letters are there? It seems like it'll be just two or three more times at the most. The time that's left seems to be moving more slwoly than the time that has already passed. Though I have some worry, I want to make a good final end. Though it's midsummer, all of you be careful of catching colds(?) and stay healthy. Bye!