2012: "Choose between Jail and the Barracks" 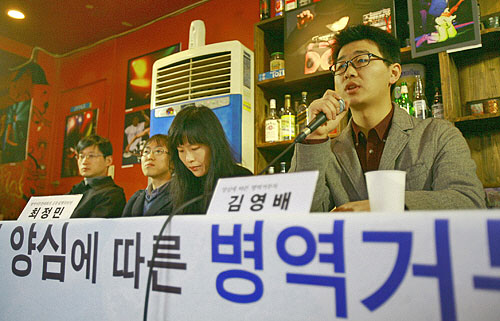 The government has officially rejected the UN Human Rights Committee's directive that it recognize conscientious objectors to military service.

A June 18 government report on human rights stated, "In consideration of critical public opinion on the military and current national security situation, it is difficult to introduce a system of alternative service for those who refuse to join the military or take up arms on religious and other grounds." The government argues that troop levels must be kept high due to ongoing tensions with North Korea.

The report, which will be submitted to the UNHRC, contains the government's stances, as prepared by the Ministry of Justice through deliberation with other related government departments and civic groups, to 33 suggested improvements to human rights that were highlighted by the UNHRC's first conference on August 2008.

"The Constitutional Court has previously ruled that articles in military law on punishment for those that refuse to enlist or take up arms are in line with the constitution," said an official from the Ministry of National Defense. The MND announced a plan to introduce alternative service in September 2007 under the Roh Moo-hyun government, but discussions were shelved when the current administration took office.

In April of this year, the National Human Rights Commission submitted a report to the UNHRC saying, "[Korea] must consider the introduction of a system of alternatives to military service."