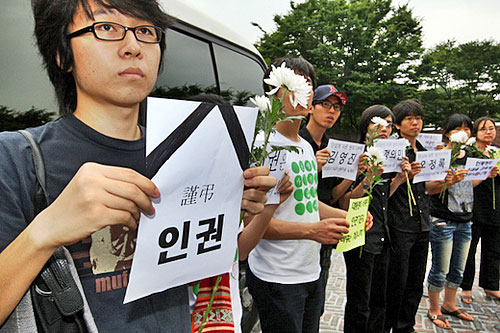 On July 6, conscientious objectors and human rights activists criticized the Defense
Ministry for trying to bury a plan that would allow conscientious objectors to perform
alternative forms of service in front of the Hyatt Hotel in Seoul, where UN Secretary-
General Ban Ki-moon was meeting with National Human Rights Commission of Korea
President Ahn Gyeong-hwan.

According to the People's Solidarity for Participatory Democracy (PSPD) and other groups on Oct. 28, at the third Universal Periodic Review (UPR) by the UNHRC, out of 65 member countries, eight including Germany, the U.S., France, Australia, Spain, Hungary, Poland, and Slovakia recommended that the South Korean government introduce alternative military service for conscientious objectors.

The Universal Periodic Review is a mechanism through which the UNHRC examines the state of human rights in 193 U.N. member states once every four years. The U.K. and Slovakia had suggested the introduction of alternative military service to the South Korean government at the first review carried out in 2008. The number of countries that find serious problems with South Korea's practice of imprisonment for conscientious objectors has grown in the four years since then.

The German representative said, "In South Korea, conscientious objectors are severely punished. The imprisonment of such people must be stopped." The representative from Hungary pointed out, "As carried out successfully around the world, it is possible for South Korea to introduce alternative military service."

Ahead of the second UPR, the South Korean government submitted its opinion that introducing alternative service is complicated on the grounds of the division of North and South, and no national consensus has taken shape on the issue.

The United Nations Human Rights Committee advised South Korea three times in 2006, 2010, and 2011 to eliminate the criminal records of conscientious objectors and to enact legislation that permits the right to refuse enlistment for reasons of conscience.

Meanwhile, at this year's UPR, 65 countries examined the state of human rights in South Korea. Suggestions made by those countries include ensuring freedom to stage peaceful demonstrations and controlling excessive governmental authority; abolishment of discrimination against sexual minorities in the military; abolishment of capital punishment; revision or repeal of the National Security Law; enforcement of comprehensive anti-discrimination law; and human rights protections for immigrant workers.

PSPD issued their commentary on Oct. 28, "South Korea has not accepted most of the recommendations, except for some including the Convention on the Rights of the Child. It is worth questioning whether South Korea, which is seeking to be a member of the UN Human Rights Council for 2013, really deserves the post."