Located in No. 15 Jiangsu Road, Jiangsu Road Church was built up on a hill in the old city district. Started from 1908 and finished in 1910, the Church was constructed in medieval castle style with grand appearance of primitive simplicity. In 1992, the Church was listed as one the most important provincial protected historic sites, then it's opened to both domestic and overseas tourists from May 1st, 1999. Thus the Church can be accessed both by worshipers and tourists. Originally there was one church in Germany, which was designed and constructed according to the same drawing with Jiangsu Road Church, but it was destroyed in the Second World War. Therefore, the Church in Qingdao turned to be more precious. 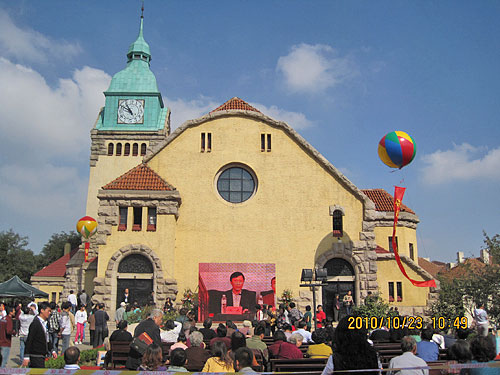 The building boasts of its area of 1297.51 m2, tower height of 36.47 and a capacity of 1400 people. Facing sea in the south, the Church had a wide vision with no blockages around in the beginning when it was built. With a close integration of architecture and terrain, the building gained the best visual effects of the front of the bay.

There are mechanical clocks in the three walls of the Church tower. In the 20th century, watches were unattainable for common people, so the clocks acted as the significant instrument for the nearby citizens to check time. Thereby the building got its nickname "Clock Tower Son".

Jiangsu Road Church witnessed the modern and contemporary history of Qingdao, the beautiful seaside city. The Church's owners were changed for many times, but it still looks young and vigorous. When Germany entered and governed Qingdao at first, the governor, a Lutheran Christian, established this Church for German Christians. At that time, believers from both German and other foreign countries came here for worship meetings. However, after World War I in 1914, Berlin Churches ran out of funds, and sold the Church to Evangelical Lutheran Congregation of America with a price of $ 40,000 in 1925. Hence it served as the "International Chapel" for all the expats in Qingdao. Since 1949, all the religious activities in Jiangsu Road Church were prohibited owing to the founding of China. During the Cultural Revolution, the church was used as part of a medical college and was seriously ruined. The colorful glass with paintings in central hall of the building was totally extinguished, and so were the baptism font and the pipe organ in the second floor.

In 1979, Jiangsu Road Church was returned to Qingdao Christian Council. In 1980, it undertook major repairs of glass, interior and exterior walls, wiring, ceiling lamp, and the back-rest chairs were equipped. On November 2nd, 1980, the Church resumed worship meetings as the first church recovered after the Revolution in Shandong province. On that day, 500 Christians attended the worship and many were moved to tears.

Now there are approximately 60,000 Christians in Qingdao and they come from all circles, like teachers, doctors, entrepreneurs, managers, and the number of believers is mounting up by 2000 per year. Some of them are from Christian families and others embrace the belief after learning more about western culture or contacting with foreign followers of Christ.