Here is a statement originally issued on January 7, 2014, signed by 29 international scholars, peace advocates and artists.
Below the statement are the list of the 103 signatories as of January 28, 2014, and the press release issued on that day with the contact information of the three organizers of the petition. The signatories include filmmakers Oliver Stone and Michael Moore, linguist Noam Chomsky, and Nobel Peace laureate Mairead Maguire.
Please join them by signing this petition and help bring justice to Okinawa 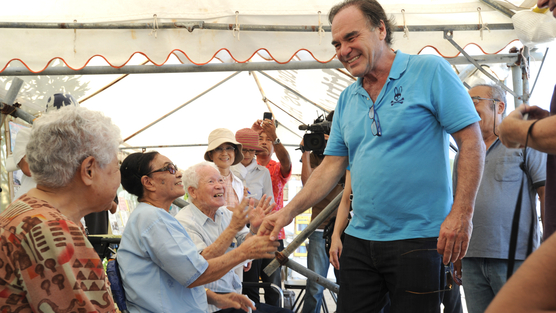 We oppose construction of a new US military base within Okinawa, and support the people of Okinawa in their struggle for peace, dignity, human rights and protection of the environment

We the undersigned oppose the deal made at the end of 2013 between Prime Minister Shinzo Abe and Governor of Okinawa Hirokazu Nakaima to deepen and extend the military colonization of Okinawa at the expense of the people and the environment. Using the lure of economic development, Mr. Abe has extracted approval from Governor Nakaima to reclaim the water off Henoko, on the northeastern shore of Okinawa, to build a massive new U.S. Marine air base with a military port.

Plans to build the base at Henoko have been on the drawing board since the 1960s.  They were revitalized in 1996, when the sentiments against US military bases peaked following the rape of a twelve year-old Okinawan child by three U.S. servicemen. In order to pacify such sentiments, the US and Japanese governments planned to close Futenma Marine Air Base in the middle of Ginowan City and  move its functions to a new base to be constructed at Henoko, a site of extraordinary bio-diversity and home to the endangered marine mammal dugong.

73.8 percent of the US military bases (those for exclusive US use) in Japan are concentrated in Okinawa, which is only .6 percent of the total land mass of Japan. 18.3 percent of the Okinawa Island is occupied by the US military. Futenma Air Base originally was built during the 1945 Battle of Okinawa by US forces in order to prepare for battles on the mainland of Japan. They simply usurped the land from local residents. The base should have been returned to its owners after the war, but the US military has retained it even though now almost seven decades have passed. Therefore, any conditional return of the base is fundamentally unjustifiable.

The new agreement would also perpetuate the long suffering of the people of Okinawa. Invaded in the beginning of the 17th century by Japan and annexed forcefully into the Japanese nation at the end of 19th century, Okinawa was in 1944 transformed into a fortress to resist advancing US forces and thus to buy time to protect the Emperor System.  The Battle of Okinawa killed more than 100,000 local residents, about a quarter of the island’s population. After the war, more bases were built under the US military occupation. Okinawa “reverted” to Japan in 1972, but the Okinawans’ hope for the removal of the military bases was shattered. Today, people of Okinawa continue to suffer from crimes and accidents, high decibel aircraft noise and environmental pollution caused by the bases. Throughout these decades, they have suffered what the U.S. Declaration of Independence denounces as “abuses and usurpations,” including the presence of foreign “standing armies without the consent of our legislatures.”

Not unlike the 20th century U.S. Civil Rights struggle, Okinawans have non-violently pressed for the end to their military colonization. They tried to stop live-fire military drills that threatened their lives by entering the exercise zone in protest; they formed human chains around military bases to express their opposition; and about a hundred thousand people, one tenth of the population have turned out periodically for massive demonstrations. Octogenarians initiated the campaign to prevent the construction of the Henoko base with a sit-in that has been continuing for years. The prefectural assembly passed resolutions to oppose the Henoko base plan. In January 2013, leaders of all the 41 municipalities of Okinawa signed the petition to the government to remove the newly deployed MV-22 Osprey from Futenma base and to give up the plan to build a replacement base in Okinawa.

Our statement (http://p.tl/vZzS) of January 7, signed by 29 prominent scholars and artists, received wide international media attention, especially from outlets across Japan. It helped to empower and invigorate the people of Okinawa, who were appalled by Governor Nakaima’s year-end capitulation to forces who want to build a large new U.S. Marine base on the island. One Okinawan resident emailed us, “You don't know how much this statement has meant to me and many fellow Okinawans who are in this struggle. I wish you were here to see this.”

January 19 marked a triumphant moment for Okinawa when residents of Nago City re-elected Mayor Susumu Inamine, who has consistently opposed the base construction “on land or on sea.” According to a pre-election poll, only 9 percent of Nago residents supported the new base plan. The rejection of the new base by a majority of the residents represented a vote of no-confidence in Governor Hirokazu Nakaima, who supported the pro-base candidate, and in Prime Minister Shinzo Abe, who pressured Nakaima to go along with the U.S. relocation plan. And as the New York Times rightly said, Mayor Inamine’s win dealt “an embarrassing blow to Prime Minister Shinzo Abe,” who attempted to buy votes with talk of more subsidies and public works projects.

In the electoral history of Okinawa, no candidate has ever won by actively supporting a new base. The last Nago election was no exception. Citizens of Okinawa have filed a lawsuit to nullify Governor Nakaima’s approval of the massive land reclamation needed to build the base. They are seeking a way to recall the governor. The prefectural assembly passed a resolution to demand Nakaima’s resignation.  The Abe and Obama governments, however, appear to be preparing to crush all resistance in Okinawa. Only two days after Mayor Inamine’s re-election, the Japanese government started soliciting bids for preliminary work on the base construction.

Okinawans will continue to protest, as they have in the past, in the ways of demonstrations, petitions, elections, lawsuits, sit-ins, academic and artistic activities, and direct actions to stop construction. On occasion they have paddled canoes and tied themselves to scaffolding towers to successfully obstruct a government survey of the ocean. We support them in their ongoing struggle for peace, dignity, human rights, and protection of the environment. We are now launching a petition drive calling for international opposition to new base construction in Okinawa and immediate return of Futenma and challenging Abe and Obama’s contempt for the democratic and human rights of the people of Okinawa. The URL for the on-line petition is http://chn.ge/1ecQPUJ.

To:
President Barack Obama
Prime Minister Shinzo Abe
Almost two decades ago, under strong pressure from local citizens who were tired of noise, accidents, and crime, including the rape of a 12 year old girl by three U.S. soldiers, the U.S. and Japanese governments pledged to close the United States’ Futenma Marine air base in Okinawa, but insisted on building a replacement base at Henoko in the northern Okinawan city of Nago.

Okinawans have said no to base relocation, repeatedly expressing their opposition through elections, demonstrations, and civil disobedience. But the pressure from Washington and Tokyo has been fierce and unrelenting. Okinawa Governor Hirokazu Nakaima, who had won the election by calling for relocating the base outside of Okinawa, recently caved into that pressure and, in an utter betrayal, approved reclamation of the water off Henoko in order to construct the new base.

72.4 percent of Okinawans view this as a “breach of his election pledge.” In an act of defiance, widely interpreted as a plebiscite on base construction, voters in Nago re-elected mayor Susumu Inamine, an outspoken base opponent, over the Tokyo- and U.S.-backed pro-base candidate. Overall, 73.5 percent of Okinawans oppose relocation within Okinawa. Now, with U.S. backing, the Japanese government, in an act contemptuous of democracy and of environmental protection, says it will ignore the expressed will of the Okinawan people and proceed with the Henoko base construction.

In January 2014, over one hundred international scholars, peace advocates, and artists signed on to the statement to demand cancellation of the plan to build the Henoko base and to insist upon the immediate return of Futenma to the Okinawan people. We support the people of Okinawa in their non-violent struggle for peace, dignity, human rights, and protection of the environment. We join the initial signers in asking you to put democracy before militarism and to move towards ending military colonization of Okinawa by removing the Futenma base without building another base within Okinawa.
Sincerely,
[Your name]