Urashima Etsuko with an introduction by Gavan McCormack

May 15 marks 40 years since Okinawa "reverted" from US military administration to Japan, but the celebrations in 2012 will be muted. While few Okinawans regret the fact of reversion, there is widespread resentment over the fact that the national government continues to insist the prefecture serve US military ends first and foremost. Newspaper opinion surveys taken on the eve of the commemoration found that 69 percent of Okinawans believed they were the subject of inequitable and discriminatory treatment because of the heavy concentration of US military bases, and nearly 90 percent took the position that the Futenma Marine Base should either be unconditionally closed and the land simply revert to Ginowan township or else be moved away, whether elsewhere in Japan or beyond it. That figure exceeds even the opposition of the time of the Hatoyama government (84 percent) less than two years ago. A similar 90 percent oppose the deployment within Okinawa of the accident-plagued MV22-Osprey VTOL (vertical takeoff and landing) aircraft that the Pentagon, backed by the government of Japan, promises to deploy in Okinawa from July.1

Such is the strength of this sentiment that Okinawa's governor, the conservative ex-bureaucrat Nakaima Hirokazu, visiting Tokyo at the time of the announcement, declared that such a deployment would be "extremely impossible " (sic), and suggested that if the aircraft were really so safe they could be deployed in Tokyo's Hibiya or Shinjuku Gyoen parks.2 The outrage deepened a week later when it was announced that the aircraft would be assembled and first tested at Naha Military Port, little more than a stone's throw from Okinawa's capital, Naha. Naha mayor Onaga described it as the worst proposal ever, and declared that he could not contain his fierce anger at the way the people of Okinawa and Naha were being mocked.3 Medoruma Shun, the prefecture's pre-eminent novelist, also widely respected as its conscience, called upon the governor to convene a mass meeting of Okinawans to formally declare their opposition.4

The points of confrontation between Tokyo and Okinawa slowly multiply and deepen in seriousness – Ginowan City, home of the Futenma Marine Base; Nago City, designated site for a Futenma replacement facility; Kadena City, 22,000 of whose citizens are suing (the biggest civil suit in Japanese history) to try to recover their peace from the constant noise caused by landings and takeoffs from the city's USAF base; and Yonaguni Island, where residents mobilize to prevent the deployment of Japanese Self Defense Forces (for the first time). Throughout the island anger spreads at the prospect of a new threat – the vertical takeoff and landing aircraft, MV22-Osprey (discussed by Urashima) now scheduled to be introduced to the island in July.

In the north of Okinawa Island, little attention is paid to the appropriation of forests by the US marine forces based at Camp Schwab. On the commemoration of another, closely related, anniversary, the 60th of Okinawa's formal severance from Japan under the San Francisco treaty of 1952, the writer Urashima Etsuko, like Medoruma a voice of Okinawan conscience, walked up Mt Kushi to reflect on the price that was being paid by nature itself under the weight of priority to the US military. We are pleased to publish an English translation of her April 2012 essay.
(Gavan McCormack)

April 28th was the 60th anniversary of the day the San Francisco Peace Treaty came into force in 1952. Under the Treaty, mainland Japan recovered its sovereignty lost in the defeat of the war but Okinawa remained under US military control for a further twenty years. On this day, known in Okinawa as a "day of humiliation," at the suggestion of a friend I climbed Mt Kushi which overlooks the US Marine Corps' Camp Schwab training grounds.

The twin peaks of Mt Henoko (332 metres) and Mt Kushi (335 metres) rising up in roughly the middle of the island still today are a fine sight and it is easy to believe that the children of Henoko and Kushi villages used to dispute with each other over which was the more beautiful. But today, from as far away as Henoko village, you can see how the red soil of the mountain has been exposed by shelling practice from the live firing range that surrounds it. 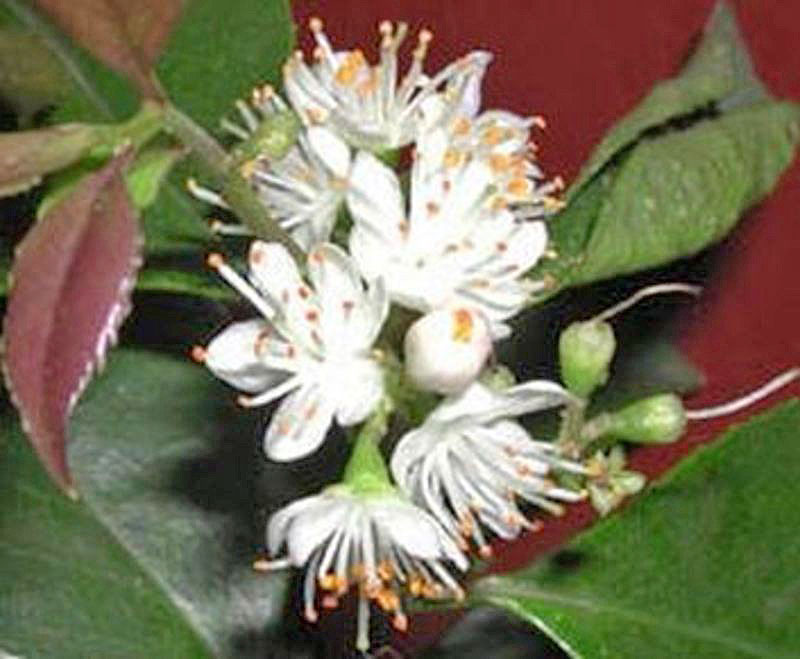 I had thought it would not be possible to climb [in a military area] but, while one cannot climb from the east sea side one can climb from the west because that side is not used as a firing range. Hearing that the mountain was quite an easy walk, and that you could look out over the firing range from the peak, I put on boots and a rain coat – since unfortunately it looked like rain – and set off on the climb. (The Okinawa rainy season began on this day, 11 days earlier than usual.)

Going by car as far as the track that lies between the settlements of Kyoda and Sukuda on Nago City's west coast, I headed off on foot on the mountain path that begins from the "improved" area of farmland on the skirt of the mountain. As I later realized, the west coast sector of Mt Kushi is part of Kyoda. Kyoda is a village made up in the main of people known as "yadui" who came and settled here at some point, clearing land on the mountain where they subsisted by planting sweet potato and the like, while also cultivating timber, firewood, charcoal, and indigo dye as cash crops.

Here and there while climbing the mountain may be seen relics of the lives people used to live in those times -- the remains of stone walls built to terrace the fields, charcoal burning kilns still more-or-less intact, shards of old glass bottles, pots, and jugs, and holes that might have been dug as wild boar traps. The mountain track across the soft surface of fallen leaves was without doubt a path that people had once worn as they went about their daily lives.

It being just slightly past the season of new green growth in the forest, trees were vying with each other to blossom. I gasped in astonishment at suddenly coming across a gorgeous climbing orchid. There were also black orchids in abundance flowering along the path. Dark and at first glance inconspicuous, on close inspection they reveal a delicate flower. Here and there, white flowers of the symplocos (ruriminoki) family were also to be seen. 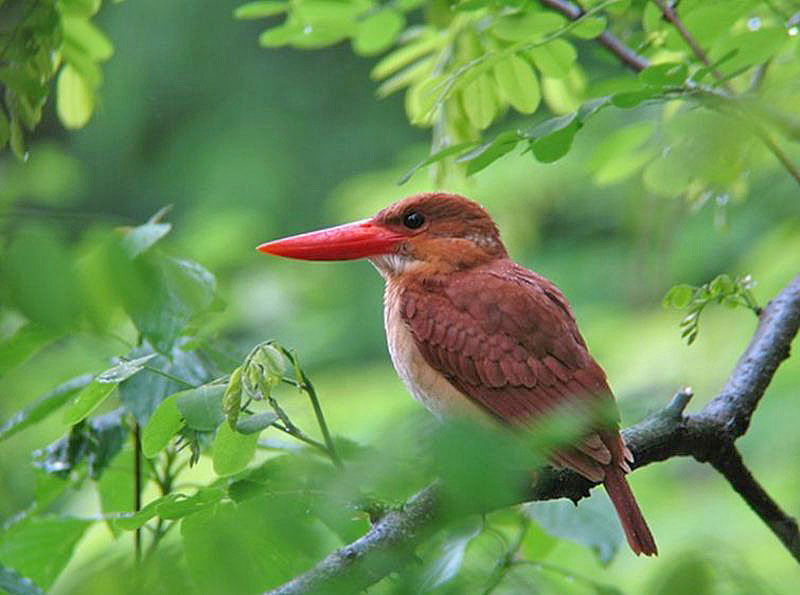 As a gentle rain fell and I walked along entranced by the song of a ruddy kingfisher (akashobin) migrating from southern parts (that started to sing on April 15 in the vicinity of my home) and the familiar beautiful song of the bush warbler coming from somewhere up ahead, suddenly I heard the ear-splitting bang bang of live firing practice. The noise grew louder as I approached the summit, joined by the sound of engines. It was most likely the noise drifting over the treetops from "Yukari Farm" (which used to be a bull-fight site and is now used as a race track, creating a racket that people nearby complain of); the two together created an ear-splitting racket. What a nuisance they must be to the birds. When I looked to where my friend had indicated there were the scattered remains of what looked like a helicopter.

On reaching the summit I was astonished at the breadth of the shooting range that spread out before me. Being accustomed to look at the mountains from the sea, I had not imagined them to be so vast. The forests of Higashi and Kunigami villages that make up the Northern Training Centre (or "Jungle Warfare Centre") are so splendid as to be said to be worthy of classification as World Heritage, but this was in no way inferior. Here and there practice sites had been set up and these sites were one source of the firing noises. My friend also said that these sites had been freshly cleared, not existing on the previous occasion when he had come up here. The stick-like poles were, he said, "dummy human targets for shelling." 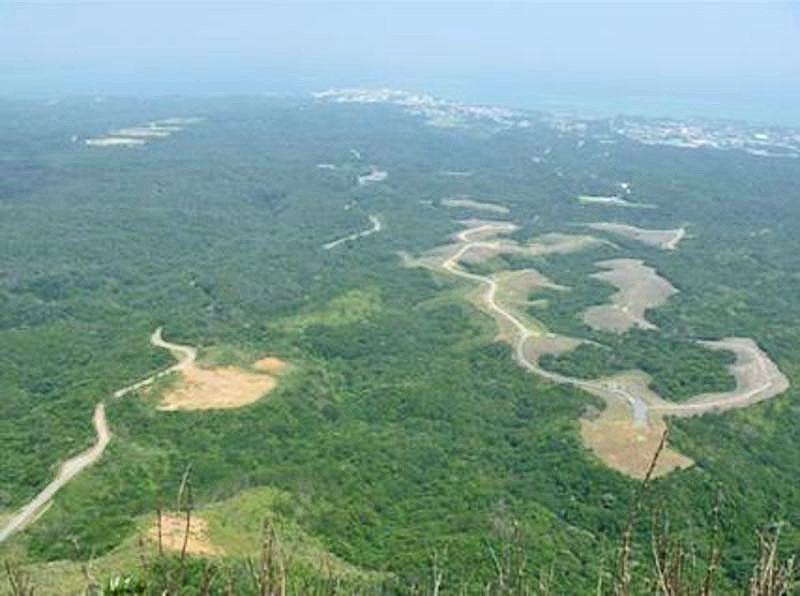 View from Mt Kushi across firing ranges towards Henok

In the Okinawan newspapers of 25 April, it was reported that the US military had told the Government of Japan that it was going to deploy the V-22 Osprey (vertical takeoff and landing or VTOL) aircraft to Futenma Marine Base from July, though it had been scheduled for September. Just a little earlier, on 11 April, an Osprey had tragically crashed while on manoeuvres in Morocco, killing two marines and leaving another two severely injured. I could hardly contain my anger at the way that, so soon after the Osprey had proved itself worthy of the name "flying coffin," they treated Okinawans with such contempt, shamelessly kicking aside the fierce protests not only from Futenma but from the whole of Okinawa. It sends shivers down my spine to think that if ever a new base was to be built at Henoko, the Osprey might come here. 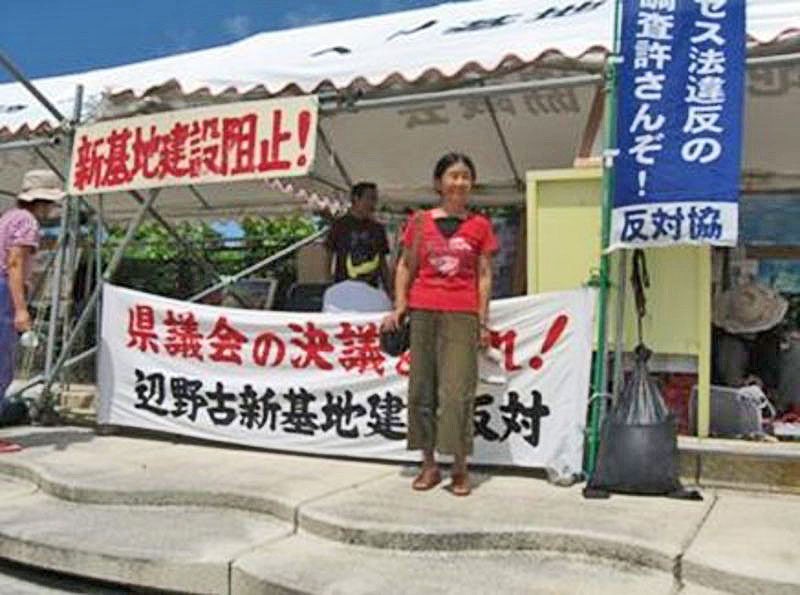 Before the US bombing of Okinawa on 10 October 1944 (which not only reduced Naha City to rubble but caused severe damage throughout Okinawa Island) US forces took aerial photographs of the whole of Okinawa Island, so they knew the exact location of everything. It seems that, by analysing these aerial photographs, they drew up detailed plans for use of the island – just as if there were no people here. You can also see this from the nature of the bombing. To take one example, while many villages were burned by bombing attacks, other, neighbouring settlements escaped unscathed and these were later used as refugee encampments.

When looking over the forest from the peak, my thoughts turn to the US soldiers that once looked down over this forest from the sky. They must have been thinking about how they could make use of this place for war. I thought once again that this precious forest that has given life to so many creatures and sustained the local people must not be allowed to be used for war. It pains me to look upon the withered brown firing range. I want to take back this forest and resurrect it as a forest of life. Moved by such thoughts, I stood on the summit of Mt Kushi.

Urashima Etsuko is an environmental activist, author, and chronicler of Okinawan people's movements of resistance against bases and hyper-development and for nature conservation. The Japanese text of this article was written (dated 30 April 2012) as her regular essay for the quarterly Impaction.
Author Urashima at Henoko, 2008

Translator
Gavan McCormack is emeritus professor at Australian National University, a coordinator of The Asia Pacific Journal, and co-author (with Satoko Oka Norimatsu) of the soon to be released Resistant Islands: Okinawa Confronts Japan and the United States (Rowman and Littlefield, July 2012).

Recommended citation: Urashima Etsuko with an introduction by Gavan McCormack, 'Okinawa's Nature Groaning – Let's Turn Mt Kushi into a Forest of Life. On the Sixtieth Anniversary of the San Francisco Treaty and the Fortieth Anniversary of Okinawa's Reversion to Japan,' The Asia-Pacific Journal, Vol 10, Issue 20, No 1, May 14, 2012.

•Medoruma Shun, We Cannot Allow Governor Nakaima to Falsify the History of the Battle of Okinawa

•Gavan McCormack, Mage – Japan's Island Beyond the Reach of the Law

•Steve Rabson, Henoko and the U.S. Military: A History of Dependence and Resistance

•James Roberson, Songs of War and Peace: Music and Memory in Okinawa here

•Ahagon Shoko and C. Douglas Lummis, I Lost My Only Son in the War: Prelude to the Okinawan Anti-Base Movementhere