On May 24, 2015, thirty women peacemakers from fifteen nations, including American feminist activist Gloria Steinem and two Nobel Peace laureates, Mairead Maguire from Northern Ireland and Leymah Gbowee from Liberia, walked with Korean women of the North and South to call for an end to the Korean War and the peaceful reunification of Korea on the seventieth anniversary of its division. The arbitrary division of the peninsula in 1945 by the United States and the Soviet Union led to the creation of two separate states, setting the stage for an all-out civil war in 1950 that became an international conflict. After nearly 4 million people were killed, mostly Korean civilians, fighting was halted when North Korea, China, and the United States representing the UN Command signed a ceasefire agreement in 1953, which called for a political conference within three months to reach a peace settlement. Over 60 years later, we are still waiting. To renew the call for a peace settlement by offering a model of international engagement, Women Cross DMZ organized peace symposiums in Pyongyang and Seoul where women shared experiences of mobilizing to bring an end to violent conflict, and crossed the two-mile wide Demilitarized Zone (DMZ) that separates millions of Korean families as a reminder that division can be overcome. As one of the members of the organizing committee of Women Cross DMZ, I travelled with other international women peacemakers to meet face- to-face with Korean women on both sides of the DMZ and cross the military demarcation line that divides Korea. On the seventieth anniversary of Korea’s partition this August 2015, I write as a historian of modern Korea to reflect upon the experience specifically from a feminist standpoint. 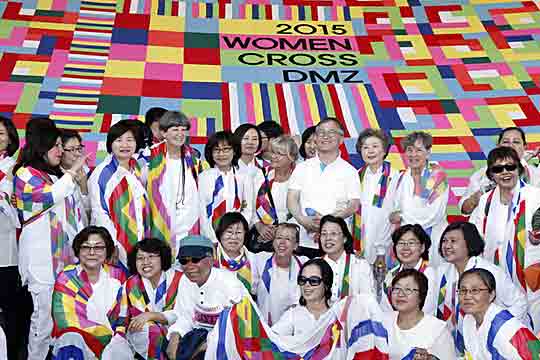