15. August 2014
Worship service in Pyongyang focuses on peace and reunification of Korean peninsula 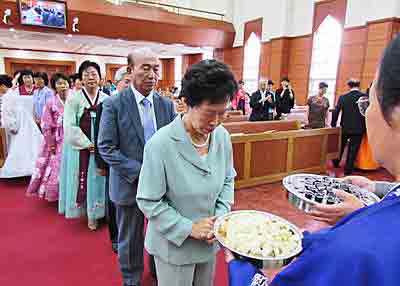 Eucharist service at the Bongsu Church in Pyongyang. Photo: NCCK

20 August 2014
Prayers for peace and reunification of the Korean peninsula were held at the Bongsu Church in Pyongyang, North Korea on 15 August, with participation from a nineteen-member delegation organized by the National Council of Churches in Korea (NCCK), comprised of representatives from member churches of the World Council of Churches (WCC) and ecumenical organizations from South Korea, including women and youth delegates.

The worship service was jointly prepared by the NCCK in South Korea and the Korean Christian Federation (KCF) in North Korea.

Rev. Kang Myong Chol, chairperson of the KCF, said, “We have been connected as one in Jesus Christ. Jesus said, in the Sermon on the Mount, there will be blessings for those who work for making peace. So we Christians, who have a calling for peace and unification, should reject all machinations of war, and we should rise up for the peace and reunification of this country.”

Rev. Kim Young Ju, general secretary of the NCCK, said, “We should meditate on the fact that the true liberation will be completed only when we have accomplished the peace and reunification of South and North Korea”.

At the service, Dr Lee Un Son from Sejong University in Seoul and Rev. Kim Hye Suk of the KCF read together the joint prayer for peace and reunification of the Korean Peninsula.

The 15th of August, celebrated as Liberation Day in both North and South Korea, marks the date in 1945 when Korea won independence from Japanese colonial oppression. But it was also the day on which the peninsula was divided into two political entities.

Statement on Peace and Reunification of the Korean Peninsula