Shenyang Report of NCCK and KCF

Dear Friends of the Ecumenical Forum for Korea,
Warm greetings from Seoul!

I am pleased to report you regarding recent meeting of the NCCK and the KCF in Shenyang, China.
Thank you very much for your continuous concern.
With warm wishes.
Heawon Chae

Report of Shenyang Meeting
between the NCCK and the KCF

On 20th of March, the NCCK met with representatives from the Korean Christian Federation in Shenyang, China. It was very meaningful in that this is the first meeting between the NCCK and the KCF since Rev. Kang Young-Sup, Chairperson of the Korean Christian Federation in North Korea had passed away. For the NCCK, Rev. Kim Young-Ju, General Secretary of the NCCK, Rev. Noh Jung-Sun, Rev. Shin Bok-Hyun, and Rev. Chae Heawon participated, and for the KCF, Rev. Oh Kyung-Woo, General Secretary, Mr. Park Sung Kook and Mr. Choi Dae Yong. The KCF expressed sincere gratitude to the NCCK for its initiative of greetings of condolence on the death of Kim Jong-Il, and for its willingness and effort to send delegates of consolation, even though it was not successful. 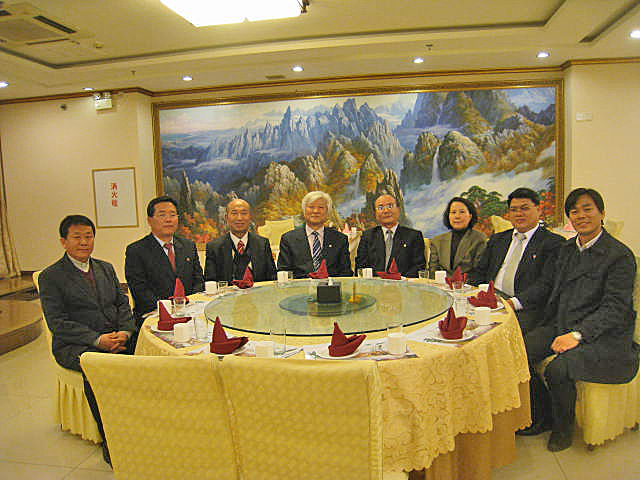 The KCF members expressed deep regret for the case of shooting at the pictures of Kim Jong Il and Kim Jong Un which took place in a military compound in Incheon. The KCF stressed that the case bothered and worsened the development of the North and South relationship. It also requested the NCCK to join in their grieving ceremony to end the 100 days of mourning for the death of Kim Jong Il on the 25th of March.

In this regard, Rev. Kim Young-Ju once more expressed sincere feelings of condolence on the death of Kim Jong-Il and Rev. Kang Young-Sup, and pointed out that churches in the North and the South have an opportunity to pave the road to peace and reunification through mutual trust and cooperation even in this difficult situation.

• Holding a North and South Joint Prayer Meeting in Gaesung, maybe in the beginning of May.

• the NCCK has requested the KCF to closely cooperate in the process of preparing the WCC 10th Assembly in Busan, 2013 in order to make churches worldwide recognize the peace issue of the Korean peninsula and induce their participation and cooperation in our efforts to build peace on the Korean peninsula.

In this regard, the KCF's participation in the WCC Assembly will be very important. Listening to NCCK projects about "Peace Train," "Peace Campaign" "DMZ Peace Concert", the KCF responded positively and they said they will make every effort to participate, and stressed that the relationship between the North and the South on the government level has to be changed and developed positively .

• This coming October the United Church of Canada will invite church representatives from both the North and the South to Toronto to hold a seminar focusing on peace on the Korean peninsula (16-19 October, 2012, Toronto). For this event, the UCC is going tol visit Pyongyang this April and meet with representatives from the KCF.

At the Shenyang Airport on the way back, we met Dr. Mathews George, Director of WCC CCIA, and shared important issues regarding the WCC Assembly and the peace issue on the Korean peninsula including the important role and responsibility of the WCC to encourage the KCF to attend the WCC Assembly as well as to cooperate in various programs for peace issue on the Korean peninsula.