South Korean court sentences labour rights leader to 5 years in prison!!!!
It is the first time such a harsh sentence is handed down in South Korea in relation to the participation in an “illegal rally”. This sets a very worrying precedent for trade unionists and rights activists, who are systematically targeted for speaking out against government labour policies and workers’ rights violations. (Source:  Facebook 5.7.2016) 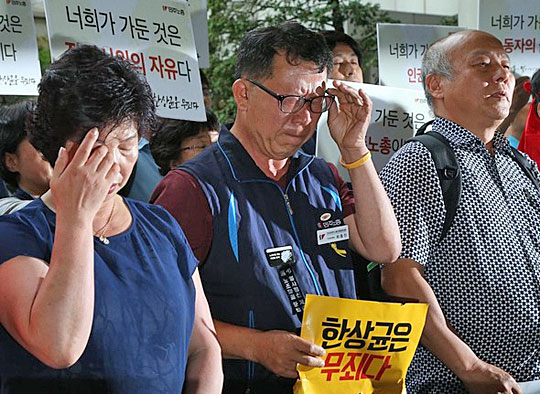 A court handed down a heavy five-year sentence to Korean Confederation of Trade Unions (KCTU) president Han Sang-gyun for leading a “popular indignation” rally last November. It is the stiffest sentence for a rally organizer since South Korea’s democratization in 1987.

Judge Shim Dam of the 30th criminal division of Seoul Central District Court ruled on July 4 to convict Han of special obstruction of public duty leading to injury, handing down on a sentence of five years in prison and a 500,000 won (US$434) fine. Han had been arrested and indicted on charges of inciting illegal actions at a total of 13 demonstrations, including the popular indignation rally.

“The violence during the popular indignation rally was severe, with some demonstrators tying up and pulling police buses with rope and attempting to set fire to the gas tank openings on vehicles carrying police officers. Mr. Han bears heavy responsibility for inciting illegal actions,” the court said.

The court also noted that the head of the Seoul Metropolitan Police Agency “communicated the intent to cooperate with KCTU - albeit in a limited fashion - before the rally, but KCTU refused.”

“It was [therefore] lawful for the police to finally give notice that the demonstration was banned,” it concluded.

Han’s lawyer claimed that the demonstration could only be staged illegally because the police had banned outright the downtown event reported by KCTU, and that Han bore no responsibility for “unintended circumstances” during the demonstration because he was not present at the scene.
But the court rejected the argument, noting that “evidence suggests KCTU prepared for the demonstration in advance with ladders and rope.”

The court also concluded the police’s actions in setting up a vehicle barricade and using a water cannon was lawful according to the Act on the Performance of Duties by Police Officers.

The decision was criticized by attorney Kim Nam-geun, vice chairperson of the group MINBYUN-Lawyers for a Democratic Society.

“There is an issue with the very fact of a constitutionally guaranteed basic right being regarded as a criminal violation of the law,” Kim said. “And if you hold a demonstration’s organizers responsible for the limited violent acts that occur at the scene, it will become impossible to hold any large-scale rallies in the future.”

KCTU blasted the decision as “a ruling that will go down in history for trampling democracy, human rights and labor.”

After Han became the subject of a police investigation for leading the Nov. 14 rally, he took refuge at Jogye Temple in Town to escape arrest. He finally turned himself in on Dec. 10 and was arrested by police. Prosecutors indicted him in January, claiming that the illegal demonstration he had led had caused damaged to the state, including injuries to 116 police officers and damage to 44 police buses.

The unusually stiff sentence from the court on July 4 suggests it fully accepted the reasoning of authorities who value public order over constitutionally guaranteed freedom of assembly. Observers criticized the lack of balance, noting that the court assigned responsibility for violence fully to the KCTU leadership even after acknowledging that some water cannon use by the police was illegal.

The court also saw the police as acting legally in announcing a ban on the popular indignation rally on the grounds that such a large-scale gathering in downtown Seoul could cause traffic jams. It further found the use of water cannons and vehicle barricades as lawful because “the 30,000 people predicted by KCTU would be expanded to cause serious traffic problems in nearly lanes.”

The court did acknowledge illegal water cannon use in the case of farmer Baek Nam-gi, who was left in critical condition after being hit directly with a jet by police.

But it concluded that “the mere fact that some demonstration suppression actions were illegal does not mean that all exercise of duties involving the police‘s operation of sprinkler trucks [water cannons] was illegal.” 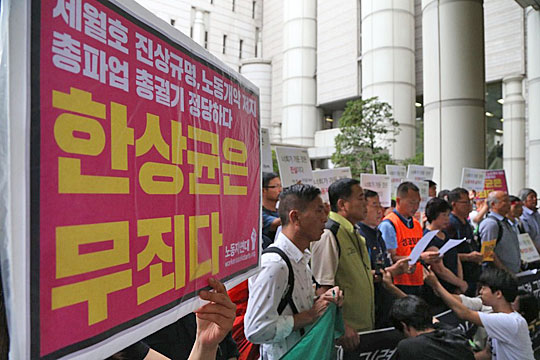 While Han’s attorneys had contended that the dragging of barricade vehicles by members of the public was a legitimate form of protecting the constitutionally guaranteed right to assembly and resisting illegal acts by police, the court responded that “only peaceful demonstrations are protected as freedom of expression in the constitution.”

In explaining its decision to hold Han responsible for violent acts at the demonstration that he did not personally order, the court said, “When one can predict that crimes will result and does not take rational measures [to prevent them], it must be regarded as tacit criminal conspiracy when the predicted criminal acts actually occur.”

In particular, the court cited the KCTU leadership’s refusal of the police’s offer to cooperation in part on the demonstrators’ march duration and course as a reason it should be held responsible.

But the same logic could prevent the exercise of constitutionally guaranteed freedom of assembly in any large downtown areas such as Seoul’s. During the trial, Han’s attorneys noted that the police “permitted the Gwanghwamun mass by Pope Francis, even though it resulted in traffic jams throughout the Gwanghwamun area” and argued that it was “illegal to ban assemblies based on arbitrary decisions by the police.”

Critics are also taking aim at the court’s claim that only peaceful demonstrations are worth protecting - particularly when harsh police measures such as blockades and vehicle barricades are a major factor when demonstrations do turn violent.

“Freedom of assembly is a constitutional right, and bans on assemblies should be a means of last resort,” said attorney Yun Seong-bong. “The spirit of the constitution is to provide maximal guarantees on freedom of expression.”

In its ruling, the court found Han guilty on all charges - which were based on a sweeping investigation of past assemblies directed by Han in a deliberate effort by prosecutors to beef up his sentence.

Prosecutors charged Han with six crimes in all, including obstruction of special government operations leading to injury, violation of the Assembly and Demonstration Act, and obstruction of duties. A total of 13 assemblies were cited, including the November popular indignation rally as well as an electrical pylon occupation in Pyeongtaek in 2012-13 and a 2014 memorial rally by the People’s Committee for the Sewol Ferry Tragedy.

Special obstruction of public duty carries a sentence of two to four years, although those convicted of repeated violations may receive a heavier sentence of three to six years. It was a strategy that paid off for prosecutors with the court’s July 4 ruling.