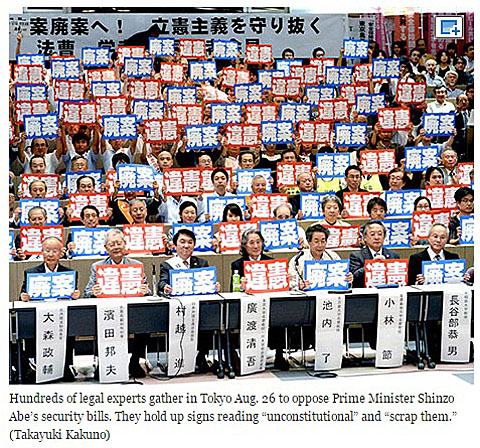 Three hundred or so legal experts gathered for a huge protest meeting to call on the Abe administration to withdraw security legislation that they say is unconstitutional. Former Supreme Court justices, previous director-generals of the Cabinet Legislation Bureau and other constitutional scholars and legal experts held the meeting Aug. 26 to protest the government’s efforts to expand the overseas role of Japanese troops through collective self- defense. The bills are currently before the Upper House.

“The right of collective self-defense allows a state to intervene in a conflict between third countries even when (Japan) is not under attack,” said Reiichi Miyazaki, who was once director-general of the Cabinet Legislation Bureau.

Miyazaki said the bills are “unacceptable in the light of war-renouncing Article 9 of the Constitution.” The gathering was held at the Bar Associations Building in Chiyoda Ward.

The Japan Federation of Bar Associations, organizer of the session, said it arranged the meeting to allow the law experts to oppose the security bills in an organized manner.

Masasuke Omori, another former director-general of the government bureau, pointed out that successive administrations have consistently concluded that to exercise the right to collective self-defense constitutes a violation of supreme law.

“I am proud that I belong to the first generation that received democratic education in postwar Japan,” said Hamada. “So I cannot accept the legislation.”

A message from Kohei Nasu, who also served as a justice in the Supreme Court, was read at the meeting.

Koichi Nakano, a professor of politics at Sophia University, said he has never seen such a large unified attempt by law experts to protest specific legislation.

“In attendance are all the leading figures in the legal community and the field of constitutional study,” Nakano said.

The group later moved to nearby Hibiya Park's open-air concert hall, where experts from other fields joined the gathering to voice their opposition.

Kenji Ishikawa, a professor of constitutional law at the University of Tokyo, criticized the Abe administration for damaging the postwar legal system of Japan.

The event organizer said a total of 4,000 people participated in the gathering in and outside the concert hall before marching to the Diet building.