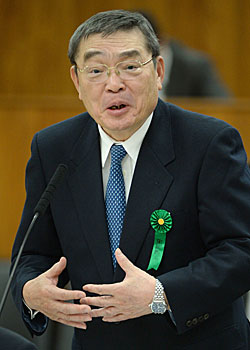 NHK, which is often compared with the BBC in the U.K., has been a focus of public attention and intense criticism in recent weeks. Many people are taking a closer look at the public broadcaster, including its history and whether it has been politically influenced by Prime Minister Shinzo Abe’s right-leaning administration.

Here are some basic questions and answers about one of Japan’s most influential media outlets:

What are NHK’s roots?
NHK stands for Nippon Hoso Kyokai (Japan Broadcasting Corporation). It is a state-linked company that dates back to 1924, when its predecessor, Tokyo Broadcasting Station, the nation’s first radio station, was launched as a nonprofit public organization.

NHK was founded in 1926 through the merger of the Tokyo, Osaka and Nagoya broadcasting stations. It was later re-established as a public broadcaster when the revised Broadcast Law took effect in 1950.

As Japan grew more jingoistic in the mid-1930s, NHK became a propaganda tool for the government and military.

But after Japan was defeated in World War II, the U.S. Occupation forces drastically democratized all Japanese institutions, including all media outlets.

The postwar Constitution guarantees freedom of the press, and the revised Broadcast Law theoretically guarantees NHK’s political and financial independence.

After television sets became widely available around the late 1950s, NHK grew into one of the most powerful and influential media outlets in Japan.

It now has 54 TV stations and 10,392 employees across the country, as well as two ground-based TV channels, two satellite channels, three radio channels and an international outlet called NHK World.

Is NHK run by the government?
NHK is a “public broadcasting organization,” which means it should theoretically be highly independent from the government both financially and politically.

NHK does not rely on the government financially. Its main revenue is reception fees from viewers, which accounted for 96 percent of its total income for fiscal 2013, according to its website. But its budget must be approved by the Diet.

The government does not have any direct power to control NHK’s editorial process, but it does appoint its 12-member board of governors, with Diet approval.

The board is responsible for appointing NHK’s chairman, who wields ultimate editorial power over all NHK programs.

The board of governors was originally set up to serve as a buffer against government influence. Its main power is the ability to appoint or fire whoever chairs NHK, and to evaluate that person’s performance. It is not allowed to intervene in the editing processes of individual programs.

Is it free of political pressure?
Probably not.

The way politicians influence NHK isn’t that obvious to outsiders, but NHK has often been criticized for being vulnerable to politicians in power, particularly those from the conservative Liberal Democratic Party.

“Japan’s Broadcasting Law clearly prohibits intervention by people in power, which is a (good) feature even compared with (those of) other countries. But (NHK) won’t try to fight against the power using such a system,” said Hiroshi Matsuda, a noted media researcher and former professor at Ritsumeikan University of Kyoto.

Keiji Shima, who was NHK’s chairman from 1989 to 1991, wrote in his 1995 memoir that the NHK budget kept growing for years because of its bureaucratic nature.

This allowed LDP lawmakers to exert strong influence on NHK’s executives because NHK’s budget must be approved by the Diet, Shima said.

“If we clash (with those in power), we definitely face retaliation in the process of (the Diet’s) approval of the budget and the appointment of personnel. . . . Even if (the people) in power or the politicians don’t say anything, self-censorship becomes stronger and stronger,” he wrote.

Does NHK’s reporting favor the government?
While it’s not that obvious, NHK tries to avoid clashing with politicians.

For years, it has maintained a fact-centered, noninterpretative style, meaning its reporters and announcers rarely make sharp, subjective statements on the issues.

This neutral and rather bland style has won praise from Japanese viewers. According to a survey last year by the nonprofit Japan Press Research Institute, 3,297 respondents gave NHK’s TV services a credibility rating of 72.5 out of 100. This exceeded newspapers, which got 70.7 points, and radio stations, which received 60.6. Information from Internet sources received only 54.1 points.

But critics say NHK’s bland reporting style shows that it does not criticize the government, even when necessary, and gives less coverage to controversial figures or activists who are unafraid to challenge those in power.

“The problem is that the LDP has so dominated postwar politics and has subtle behind-the-scenes ways of influencing it to be so ‘neutral’ that it winds up not interpreting news or criticizing the government, even when it needs to be criticized,” said Ellis Krauss, professor of international relations and Pacific studies at the University of California, San Diego.

Has NHK’s coverage changed since Abe’s return?
NHK insiders and observers say staff are more sensitive than ever about reporting controversial issues that could offend the government, especially those touching on history, territorial issues, and nuclear power.

But Momii and two of NHK’s governors came under heavy criticism from the public, the media and lawmakers who are pressing him to resign. When he was summoned by the Diet, Momii pledged not to reflect his personal opinions in individual NHK programs. But the situation is still developing, and obvious changes in NHK’s reporting and other programs have not been observed, at least so far.

Have politicians intervened in the editorial process at NHK?
Shinzo Abe, before he became prime minister, allegedly pressured NHK to change its content. In 2005, one of NHK’s chief producers alleged at a news conference that Abe and fellow LDP heavyweight Shoichi Nakagawa had pressured NHK to alter a 2001 documentary about a mock trial held by a citizens’ group to judge Japan’s wartime comfort women system, just a day before it aired.

Abe admitted meeting with an NHK executive but claimed he just argued in general that NHK should maintain a neutral position and report alternative opinions when covering such a contentious topic.

After a prolonged legal battle, a 2008 Supreme Court ruling dismissed a high court ruling that awarded damages to the citizens’ group but avoided ruling on whether Abe and Nakagawa actually interfered with NHK before the documentary aired in its selectively shortened form in 2001.