The Japanese distributor of 'A2-B-C' (WEBSITE), my documentary about children living in Fukushima, is cancelling all domestic screenings of the film.  They are also canceling the contract to distribute the film in Japan, despite there being more than two years remaining on the agreement.

It is not clear to me how much of this decision is the result of actual censorship and how much is self-censorship.  My feeling is that it is self-censorship based on the fear of a potential censorship problem at some point in the future.  If this is the case, then it is an example of the terrifying and wide-reaching effect of the Secrecy Law (INFO).  This law does not even need to be enforced for its effect to be felt: its mere existence causes people to engage in self-censorship, imposing on themselves the very crackdown that the drafters of the legislation had surely envisioned.

It is no longer possible to have honest, open discussions and debates about what is happening in Fukushima, and the cancellation of all domestic screenings of 'A2-B-C' is merely the symptom of a disease that has infected Free Speech in Japan. 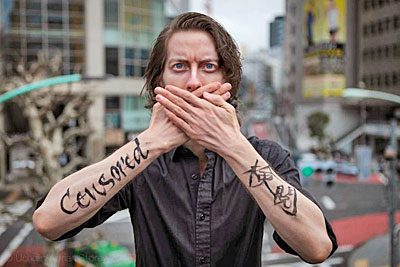 I had already been planning to attend the two screenings in Nagano today, and the distributor has instructed me to publicly make the announcement about the cancellations here for the first time.  Inviting a few journalists to be in the audience, I am turning the Q&A into an impromptu press conference.  My hands are shaking as I post this entry and am about to walk out on stage for the first of the two post-screening discussions that will be held here in Nagano today and which will mark the last time I will see my film screened in Japan.

I have no idea what I am going to say, but I can assure you that any attempt to make me quiet will only succeed in making me louder.

Several people have messaged me asking if I can upload the film to the internet in order to bypass the distribution system, but there is a very important reason why that is not possible: I made an agreement with the families who appeared in the film that I would not upload it to the internet and that a DVD of the film would not be released in Japan. This was to protect them as much as possible from becoming the targets of harsh criticism for having spoken out in a country where, as the expression goes, "the nail that sticks up gets hammered down."

One of the main reasons I decided to sign with a distributor was to strengthen my ability to keep these promises I had made with the families. As an individual it would have been difficult for me to prevent someone from uploading the film to the internet or selling pirated DVDs, but this became easier to control with the resources of a distributor.
Although some people may not see the difference between screening a film publicly and having it available online, releasing the film online would expose the families to even more harsh criticism than they are already experiencing and could lead to a very real concern for their safety. Despite the fact that 'A2-B-C' has only ever been available to watch in cinemas and the privately organized screenings, the mothers in the film have been the recipients of cruel bashing and internet bullying by often anonymous attackers.

One example of the outrageous attacks being made on the mothers who had spoken out about their concerns for the health and safety of their children was an article that attempted to discredit them and accused me of making the film for the express purpose of inciting discrimination against the people of Fukushima which I first wrote about here: http://ianthomasash.blogspot.jp/2014/06/anonymous-attack.html

Thank you all for your continued support.
Peace, Ian