3.600 people gather at the Protest Rally

against construction of US air Base in Henoko, Okinawa
on September 22, 2014 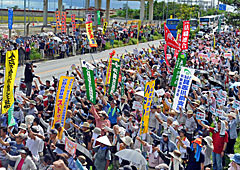 Okinawan diet members and representatives of the four opposition parties in the Prefecture Assembly have decided to hold anoteher large demonstration against the construction of the replacement facility for MCAS Futenma at Henoko, following the rally that took place on Aug. 23rd.

The demonstration is scheduled to take place at a beach side next to Henoko Fishing Port starting at 2 p.m., Sep. 20th. The planning committee seeks more than 2,000 participants.

According to a spokesman, organizers are also planning to hold another large-scale demonstration with up to 10,000 attendees at the 21st Century Forest Park in Nago sometime  mid-October.