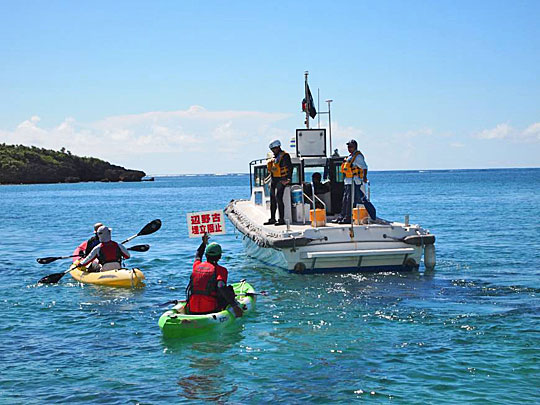 Thousands march on Henoko base site

NAGO, OKINAWA PREF. – More than 3,500 demonstrators marched to U.S. Marine Corps Camp Schwab in Nago, Okinawa Prefecture, on Saturday in the largest show of anger to date against the new American base being built off Henoko Bay to replace Marine Corps Air Station Futenma in crowded Ginowan further southwest.

Lining the road four deep for 700 meters and crowding the hillsides, the protesters chanted “Stop construction” and “Save the Bay” after assembling in the morning. Some came from as far as Hokkaido, many with their children in tow.

Okinawan legislators and peace campaign leaders gave impassioned speeches against what they called Prime Minister Shinzo Abe’s re-militarization of Japan and railed at the perceived discrimination of Okinawans.

The largest welcome was given to anti-base Nago Mayor Susumu Inamine, who was re-elected in January on a strong anti-military platform. Wearing a cape decorated with multicolored dugong, the endangered mammal threatened by the project, he greeted the crowd in Okinawan.

Inamine likened the situation on Okinawa to World War II, when more than a quarter of the civilian population died, saying that this time, the island was not under attack by the U.S. military, but by the Japanese government.
“We all need to work together to save Henoko Bay,” he said. “You can all help. We’ll never give up.”

The scale of the demonstration suggests tough times ahead for Abe’s plans to push the construction plan through before Okinawa’s gubernatorial election in November.

Incumbent Gov. Hirokazu Nakaima — who did a U-turn on his pledge and approved construction last year — is widely expected to be voted out of office after almost eight years at the helm.

The government is worried his replacement will try to terminate the long-stalled base, which the U.S. and Japan approved back in 1996.

With the clock ticking down for the election, Tokyo is rushing to complete the preliminary stages as quickly possible. It has deployed more than 100 vessels to the area to deter protesters from taking to the seas, and on Aug. 14 strung buoys around the construction site and established a 2-km exclusion zone around it.

Last week, the government started drilling into the seabed at two of 16 planned spots to ascertain whether it will be able to withstand the 21 million cu. meters of landfill it plans to dump into the bay.

These moves appear only to have strengthened the protesters’ resolve.

Hiroshi Ashitomi, one of the leaders of the Henoko peace movement, said nonviolent resistance against construction will escalate in the weeks to come.

“Abe’s government will keep piling the pressure on us but we won’t give up,” Ashitomi told The Japan Times on Friday. “The world needs to know the sufferings of Okinawa — both during World War II and today. We want peace in Asia and no military bases on our island.”

Dozens of local residents have established a new sit-in tent outside the gates of Camp Schwab — and on Aug. 19, they claimed a major victory against the authorities when they successfully turned away deliveries of construction materials to the base.

Meanwhile, flotillas of kayakers are taking to the sea daily to protest construction. More than a dozen have so far been detained — only to be later released without any charges filed.

On Friday, 32-year-old canoeist Katsuhiko Iwata received spinal injuries while being restrained by Japan Coast Guard officers after he was pulled from his boat.

“When the media aren’t watching, the coast guards turn violent. This isn’t how civil servants should behave,” he said. “But we won’t give up and as soon as I recover, I’ll head back to sea.”

The mobilization of the coast guard against peaceful protesters has angered many Okinawans, including a contingent of elected officials who were examining the planned construction site from boats on Friday. While inspecting the bay’s coral beds and grazing trails left by dugong, they were unceremoniously ordered to leave.
The officials, including Seiryo Arakaki, chairman of the Okinawa Prefectural Assembly’s special committee on U.S. bases, and Okinawa Assembly member Sueko Yamauchi, hailed the guardsmen on loudspeakers and accused them of putting the interests of the U.S. military ahead of the Japanese civilians they’re supposed to be protecting.

The U.S. government recently labeled the preparatory steps as a major breakthrough that will reduce the base-hosting duties in Okinawa and ensure lasting stability in the region.

After the replacement base opens, the U.S. plans to move U.S. Marine Corps operations to Henoko and, ultimately, shutter the Futenma base.

On Aug. 20 House of Councilors member Keiko Itokazu of Okinawa took the Abe administration to task at a special meeting at the United Nations in Geneva that was addressing racial discrimination.

Calling for a halt to the construction of the base at Henoko and the Osprey helipads in the jungles of nearby Yanbaru, she told the committee that the national government discriminates against Okinawans and ignores their human rights.
FROM THE WEB