Betrayed by the state: Sewol diver dead in apparent suicide 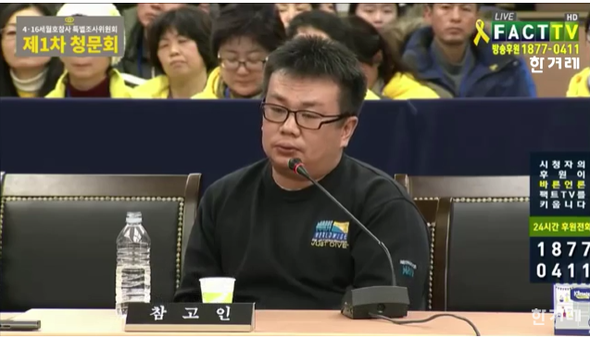 Kim Gwanhong’s voice took on an indignant tone as he testified as a witness in a parliamentary audit of the Ministry of Public Safety and Security last September by the National Assembly Security and Public Administration Committee. Then 42, he was a civilian diver who had gone to the scene at Jindo on Apr. 23, 2014, a week after the Sewol ferry sinking. “It wasn’t somewhere I went to make money.
My ‘crime’ was going there as a matter of conscience. If there’s a disaster, don’t call the public. The government needs to figure this stuff out on its own [in the future],” Kim said.

“The victims were tangled together in their utter terror, and I prayed for and cradled each one of them as I brought them,” he raged after braving the pitch black conditions in the 48meter ocean depths.

Early in the morning of June 17, Kim was found dead in the greenhouse where he lived in Goyang, Gyeonggi Province, three days before he turned 43 years old.

No specific cause of death has yet been reported. But closed circuit camera footage showed him returning home around 2 am that night and drinking on his own before collapsing an hour later. The images, along with the discovery at the scene of a fallen pill bottle and final text messages to acquaintances with messages such as “I’m sorry” and “I’ll see you in a better place in a next life,” lead to the seemingly inescapable conclusion that he took his own life. No signs of trespassing were found. 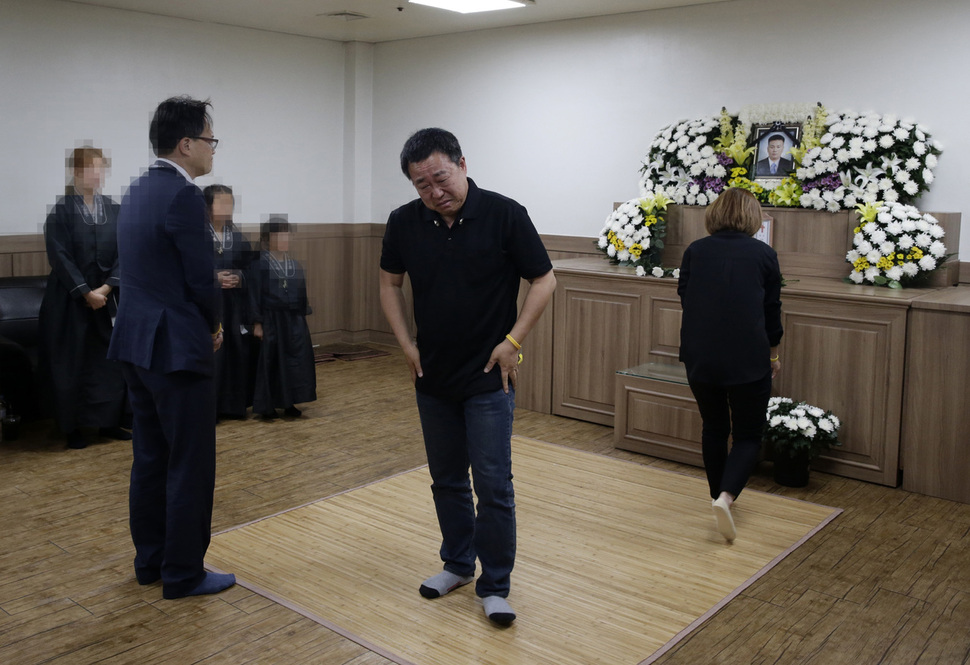 Family members of victims in the sinking were horrified by news of Kim’s death, which came as salvage efforts have been stymied by the damage to part of the hull during the raising of the Sewol’s bow.

“He really changed after the Sewol,” said Kim’s aunt during a visit to Seoul Metropolitan Seobuk Hospital, where his wake was being held.

Oh Byeonghwan, the 44year old father of Danwon High School student and sinking victim Oh Yeongseok, remembered Kim as “someone who was always cheerful when you saw him, someone who would joke with you and ask after you.”

But for the 787 days from his fateful visit to Jindo until his death, Kim’s life remain locked in the Sewol’s confines. While former Minister of Oceans and Fisheries Lee Juyoung and other officials in charge of the Sewol response have moved even further up the ladder, a civilian diver who personally recovered bodies faced indictment by prosecutors for errors in the process, accusations of taking
financial advantage, and psychological trauma severe enough to have him declaring in a radio interview last year that he “wakes up in the morning thinking only, ‘How will I die?’”

Kim also suffered disk injuries to his neck and lower back during his diving for the Sewol search effort, as well a rotator cuff tear and paralysis to his left thigh injuries that prevented him from continuing to make a living through diving. Instead, he earned money working at his wife’s flower shop and serving as a substitute driver.

“He hurt himself recovering the bodies, but after recognizing him as a civilian diver, the government turned around later and said he wasn’t, so he couldn’t receive disaster relief payments,” said Hwang Byeongju, a 57yearold diver who also took part in the efforts to recover bodies from the Sewol.

“He suffered a lot emotionally as those things kept happening to him,” a tearful Hwang added.

For the civilian divers, the time since the sinking has been nearly as traumatic as it has been for those who lost their family members.

“We were touching each of those children from the Sewol with our bare hands as we brought them up. Even now, I can’t hold my wife or my children,” said a diver colleague of Kim’s. “I can’t stand the feeling of skin.”

Despite his physical and financial troubles, Kim was also one of the most active in calling for a more thorough investigation into the sinking. As recently as an hour before his death, he was sharing news about the Sewol salvage effort on his Facebook account.

“I can remember everything that happened,” he said while appearing as a witness last December in the first hearing of the special Sewol investigative commission, after numerous government officials claimed they had “no memory” of the events in Apr. 2014.

“I can’t ever forget it. It pierces me to the core,” he said. “How can these senior government officials not know or remember?”

Kim also volunteered as a personal staffer to “Sewol attorney” Park Jumin
during his run in the Apr. 13 general elections as a candidate for the opposition Minjoo Party of Korea.

“I thought he was someone who would do whatever it took to investigate the Sewol tragedy,” he said in an April 2016 interview with the Hankyoreh. In Park, he saw someone who could potentially “help relieve the injustice for the family members and listen for once to what the divers had to say.”

Sources said Kim spoke often of his frustration as the government began treating an early end to the special Sewol commision’s activities as a foregone conclusion without a thorough investigation into the tragedy.

“Kim was very concerned that the truth about the Sewol was going to end up buried,” said Oh Byeonghwan.

“He did everything he could to bring back our children, and instead he was betrayed by the state. He was tormented by that, and by his sense of guilt for not saving the children.”