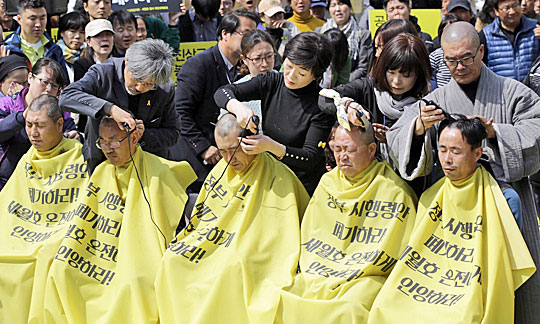 Dozens of relatives of victims of a South Korean ferry disaster that killed more than 300 people almost a year ago have shaved their heads in protest over government plans to provide compensation instead of a more thorough investigation.


The relatives also called on the government to salvage the sunken Sewol ferry, which sank off the country’s south-west coast, before starting the compensation process.

The oceans and fisheries ministry said the compensation calculations of about 420m won (£258,000) for each of the 250 students and 760m won for 11 teachers were based on age and future income potential. Including the expected payments from insurance companies and from civilian donations of about 128.8bn won, student victims’ families will receive an average of 820m won and teachers’ 1.14bn, the ministry said.

Choi Gyeong-deok, the father of one of the students, said the government had insulted the grieving families by announcing the compensation plans. “I want to grab and kill the rude people who chose to talk about money on the anniversary of the death of our children,” Choi said after shaving his head.

An official from the ministry, who did not want to be named citing department rules, said the compensation plan was “final, for the time being”. He did not, however, rule out the possibility of the committee discussing the plan at a later stage.

Officials blamed crew negligence, overloaded cargo and improper storage for the sinking on 16 April 2014, along with untimely rescue efforts. A South Korean court last year sentenced 15 crew members to between five and 36 years in prison.

A verdict by Gwangju high court on the appeals of the sentences by the crew members and the prosecutors, who complained that the punishments were too light, is expected on 28 April.

A total of 295 bodies have been recovered, and nine remain missing.