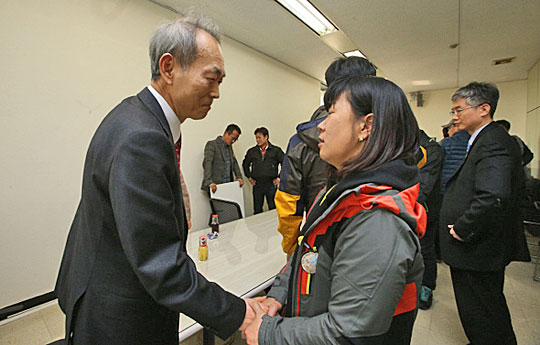 The administration gave advance legislative notice on Mar. 27 for an enforcement decree that would drastically reduce the number of staff and organization originally requested by the special committee investigating last April’s Sewol ferry disaster. The plan put forward by the Ministry of Oceans and Fisheries would give the committee a staff of just 90 people, which is thirty fewer than the 120 stipulated in the special Sewol Law. As far as the organization is concerned, the only “bureau” left would be the investigative division; the planned safe society division would be downgraded to a department. Having dragged things out for over a month since the committee submitted its plan on Feb. 17, the administration has finally given its answer: a “smaller is better” committee.

The problems with the enforcement decree don’t end with the staff and organization cuts. All the committee’s key offices, including the investigation division and safe society department, were placed under an administrative secretariat. The fact that a secretariat, which is ostensibly tasked with providing the organization with administrative support, would be put in charge of the major offices is a bizarre example of skewed organizational priorities. It reads as a clear signal that a secretariat staffed with ordinary public service is going to be controlling affairs related to investigating the ferry sinking. It’s also troubling that a planning and coordination office chaired by a regular senior civil servant is going to be “planning” and “coordinating” everything up to and including the investigation and the examination of victim support measures. The entire decree is filled with crafty angling to hand the real power to public servants sent in by the administration - leaving the committee itself without much power at all.

No lengthy explanation should for needed for why the special Sewol committee needs independence, neutrality, and sufficient personnel and material support if it is to do its job well. The administration’s enforcement decree takes things in precisely the opposite direction.

An organization plan like this is very likely to leave the Sewol committee just another government organization without the staff or budget it needs to conduct an investigation. The legislation that was announced is the institutional epitome of the kind of hamstringing of the committee at every turn that the government has shown to date.

Clear evidence of the administration’s attitude toward the committee can be seen in the way it failed to notify the committee itself when it announced the enforcement decree. The Ministry of Oceans and Fisheries claimed the committee “already knew everything because the discussions had finished.” But its actions still defy not just common sense but basic etiquette. Here is another good example of the way the government has consistently treated the committee with contempt and fault-finding, instead of respect and cooperation.

The purpose of the advance legislative notice system is to prevent the administration for unilaterally making decree, and to allow the collection of citizen opinions to make up for any problems. The administration cannot be allowed to get away with pushing its special Sewol Law enforcement decree as is.