His heart keeps beating for East Asia and India 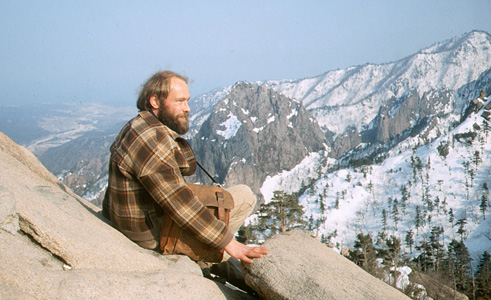 During his time in South Korea, Lutz Drescher learnt to love the people, culture and nature, like the Seoraksan national park. (Photo: EMS/Drescher)

After almost 15 years as Liaison Secretary at the EMS, Lutz Drescher now goes into retirement. When he took up his post in 2001, his heart was already beating for Korea and India. Curiosity awoke his enthusiasm for Japan and the entire East Asian region. Long-term partnerships, personal friendships and pet subjects are the deep roots that bind Lutz Drescher firmly to this region, even in his retirement.

You are shortly due to retire and leave your post at the East Asia/India Liaison Desk at the EMS - what are your feelings about that? 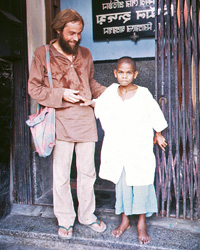 One of the happiest days of his life: Little Lau survives the hospice in India. After weeks, he breathes fresh air again. (Photo: EMS/Drescher)

I look back with a lot of gratitude to my time at the EMS. This is where the common threads of my life merged together. When I went to India for the first time in 1972, the expanse, diversity and otherness which I experienced there changed my life for ever. Not only did I come into contact with other religions there and learnt to appreciate interfaith dialogue, I also rediscovered my own faith. God is greater than all our reason - that's not something threatening or worrying for me, it's something inspiring. Getting involved with other religions, opening yourself to something different does not necessarily mean uprooting yourself - but it can deepen your own faith and make it more alive. I also read this type of comment in the assessment reports of students who we send to Japan. Assisting in this interreligious study programme and supporting young people who make similar experiences as my own in India in the past: these are some of the special moments in my work at EMS.

The encounter with Mother Theresa and others in India made the certainty in me grow that God's heart beats for people living on the margins of society. When you allow yourself to open up, as I did with others in my time as Ecumenical Co-worker in a slum district on the outskirts of Seoul in South Korea, these people can become an immense enrichment for you.

For years, Lutz Drescher worked in a poor district on the outskirts of Seoul. (Photo: EMS/Drescher)

I experienced very wise people who had no school education or graduate certificate but they were instrumental in shaping my theological thinking and pastoral activities. These are only two examples of the common threads in my life which came together during my years at the EMS Secretariat and as Executive Secretary of the German East Asia Mission. Another common thread in my life is Korea.

After you actually found your heart for India, you still went to South Korea in 1987. How did that happen?

I was called, this is a little joke I like to relate sometimes - actually, I received a phone call. It was after my meeting with Dorothea Schweizer, former EMS co-worker in South Korea, that I received a call from the former Liaison Secretary Robert Scheuermeier. I had been recommended as Dorothea Schweizer's successor. Although it was true that I really preferred to go to India. Nonetheless I decided to take on this duty. I wanted to learn something about the people who were fighting for democracy in their country. And I wanted to see how the confessing church, which I had studied thoroughly during my studies, looked like in South Korea. But you couldn't say that I was looking forward to it before I left, so it was with mixed feelings that I boarded the plane.

When I arrived, not only was I met with open arms, I was also regarded with critical eyes. The mood was anti-American and therefore anti-West. "What does this Western guy want?" is certainly what they were all thinking. But ten days after my arrival, I was standing in tear gas for the first time. And when you cry together with others, you grow closer together. Besides democracy work, it was my idea to join in the area of social work as that was my specialist field as deacon sent from Germany. But instead I founded Bible study groups in the poor district and rather worked on a more theological and spiritual basis. Joint Bible study helped me see the Bible through different eyes. For example, this is what a little girl said after reading the Nativity story: "Jesus was also born in poverty. That's why I believe he is always with us." Such a way of looking at things and understanding the Bible would not have been possible in any other place.

Demonstrating together creates unity. During the democracy movement, Lutz Drescher and his predecessor Dorothea Schweizer march with the South Korean people. (Photo: EMS/Drescher)

Of course I also acted as a type of bridge between Germany and Korea. I received and accompanied groups, translated and published a lot of articles. This is a duty I took up again in a different way when I became Liaison Secretary at EMS. But after I returned from South Korea, I first studied Diaconic Sciences and worked as parish deacon in Mannheim before switching to the EMS Secretariat in Stuttgart in 2001.

The main focal points of your work are not only on the South of the Korean peninsula but also on the North.

Yes, North Korea was always on our minds. During the democracy movement in South Korea they had the slogan: "No full democracy without reunification". It was already in 1995 that I attended a meeting in Japan between church representatives from North and South Korea. In 2002, I visited the North for the first time. Last year, I accompanied for the fourth time a delegation to the People's Democratic Republic of Korea, as North Korea is officially called. It was my dream to live there once. It's not all grey in grey. Pyongyang is actually a beautiful city on the river and the countryside in the North is simply breathtaking. Perhaps I might still live to see my dream come true.

Besides the Korean peninsula, Japan also belongs to the EMS Fellowship - did you also lose your heart to this country?

I admit I was very reserved towards Japan at the start. Due to my time in Korea, my perception of the country was very much distorted since the two countries are linked by a difficult and still unresolved history. But I dealt openly with these feelings and my reservations and this led to excellent dialogue and intensive contacts. In processing our own past, we Germans have made our own experiences. The combination of our German experience, the perception as viewed from South Korea and new contacts in Japan was very fruitful for co-operation and provided plenty of material for exciting seminars. 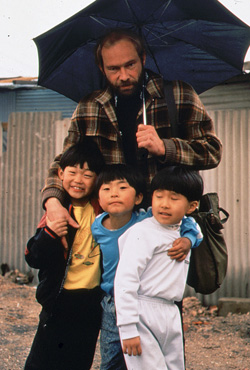 Over the years working for EMS, Lutz Drescher has shaped many people's lives - in Korea, Japan, India and Germany. (Photo: EMS/Drescher)

You are also closing your work at EMS with a conference next weekend, an India partnership seminar. Will you miss this part of your work?

Yes, conferences have been a major part of my work at EMS besides liaising with East Asia and India. In the past 16 years, I have prepared and helped organise over 40 conferences. They involved a lot of work but the results were always exciting and rich in fresh impetus for my work. Although I will not really miss the preparation phases and organisational work, I am still enthusiastic about this form of encounter and exchange. Personally, conferences create space for encounter and provide a space where God can act.

The common threads running through your life, as you said at the beginning, came together at EMS. Where will these threads take you now?

First of all to South Korea. I've been invited to speak at a conference of the Korea Democracy Foundation. This gives me the chance to travel again privately through South Korea after 17 years. I love the countless islands on the coast. I will travel to them, eat raw fish and watch the ships.

Of course there are many other invitations on my desk but it goes without saying I am always open for Korea. One thing, though, I must learn to say "No". That's something I've never really learnt after so many years of professional life.

Your successor, Solomon Benjamin will be flying to Germany from India in a few days' time and will start his work at EMS - what do you wish for him and for the whole of EMS for the future?

The EMS is a great association and if it didn't exist, it should have to be invented. We live the spirit of Ecumenism within a fellowship of manageable size - that is the EMS family. Within this fellowship we bring together what also stands in our name: mission and solidarity. Then there is the diversity and expanse which have accompanied my life since my first trip to India. I also experienced this at EMS and this is what I wish for my successor. As an Indian, he also brings with him even more diversity and expanse to the EMS Secretariat. I hope he will be given the space to bring his perspective and himself into his work here. And of course, I hope that Korea remains a fixed and important part of the EMS Fellowship.

The interview was conducted by Corinna Waltz.