Fukushima mothers at UN tell their story
May 28, 2018,  by beyondnuclearinternational

"When Kazumi Kusano stood in the CRIIRAD radiological laboratory in Valence, France listening to lab director, Bruno Chareyron, describe just how radioactive the soil sample taken from a school playground back home in Japan really was, she could not fight back the tears.

“This qualifies as radioactive waste,” Chareyron told them. “The children are playing in a school playground that is very contaminated. The lowest reading is 300,000 bequerels per square meter. That is an extremely high level.” (CRIIRAD is the Commission for Independent Research and Information about Radiation, an independent research laboratory and NGO).

Kazumi, a Japanese mother and Fukushima evacuee who prefers not to use her real name, was in France with two other mothers, Mami Kurumada and Akiko Morimatsu — all of whom also brought their children — as part of an educational speaking tour. Morimatsu was also invited to testify before the UN Commission on Human Rights in Geneva, to launch an appeal for the rights of nuclear refugees. 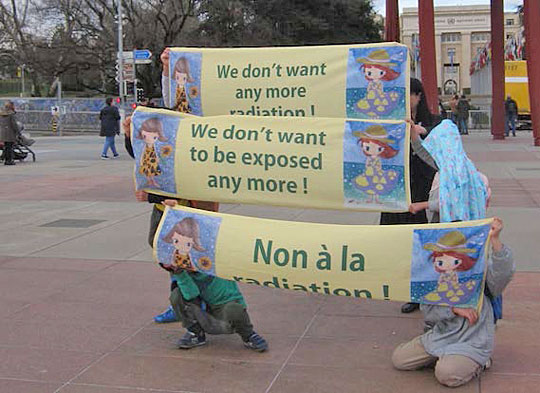 In Japan, seven years since the March 2011 Fukushima nuclear disaster began to unfold, the government is requiring some refugees to return to the region. Says Chareyron, whose lab has worked extensively in the Fukushima zone, “the Japanese government is doing everything to force citizens to return to lands where the radiation doses that citizens and children should be subjected to are largely over the typically acceptable norms.” ...."