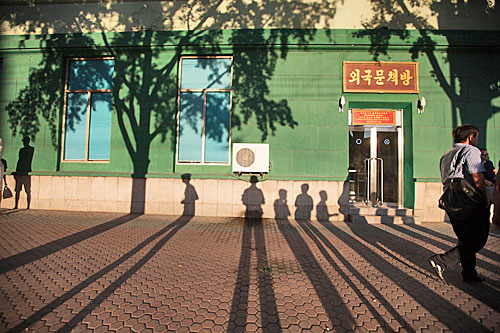 Improved inter-Korean relations and peace on the Korean peninsula were the focus of a conference attended by 58 people from churches and related organizations from the Democratic People’s Republic of Korea (DPRK), the Republic of Korea (South Korea) and 11 other countries. They gathered in Hong Kong Special Administrative Region, China from 14-16 November.

The International Ecumenical Conference on a Peace Treaty for the Korean Peninsula was organized by the World Council of Churches (WCC) and hosted by the Hong Kong Christian Council. The discussion built upon the long history of ecumenical engagement and accompaniment of Christians from both North and South Korea in their search for peace and reunification after more than 70 years of division.

Delegations from the Korean Christian Federation from the DPRK and the National Council of Churches in Korea from South Korea provided key information, analysis and recommendations as the group focused on the prospects and impact of a peace treaty for the Korean peninsula.

In a communique issued at the conclusion of the conference, participants reaffirmed the WCC 10th Assembly statement that “it is the right time to begin a new process towards a comprehensive peace treaty that will replace the 1953 Armistice Agreement”.

Ending the suspended state of war that has existed since the Armistice Agreement of 27 July 1953 is both long overdue and still critically and urgently necessary, the communique continued.

“The absence of a formal end to the Korean War still colours and obstructs inter-Korean relations today, and encourages the escalating arms race and militarization of the peninsula and region. The DPRK has repeatedly called for a peace treaty, but the USA has rejected such calls,” the communique reads. “Progress towards a peace treaty is needed now, in order to interrupt the spiralling cycle of mutual antagonism, confrontation and militarization, to reduce tensions and build trust, to ensure the withdrawal of all foreign troops from the Korean peninsula, and to promote an environment in which current issues in inter-Korean relations can be addressed and, God willing, resolved.”

The group proposed future ecumenical initiatives with regard to the Korean peninsula be purposefully and explicitly configured so as to model and exercise leadership towards a process for a peace treaty to replace the Armistice Agreement.

“We cherish the longstanding ecumenical accompaniment of the relationship, dialogue and exchange between Christians from North and South Korea, as a rare and now possibly unique resource for peace in the region,” the communique states. “It is an emblematic expression and example of the ecumenical Pilgrimage of Justice and Peace.”

Communique:
International Ecumenical Conference on a Peace Treaty for the Korean Peninsula

Communique: International Ecumenical Conference on a Peace Treaty for the Korean Peninsula

WCC video: Seeking Peace: the World Council of Churches and the Korean Peninsula