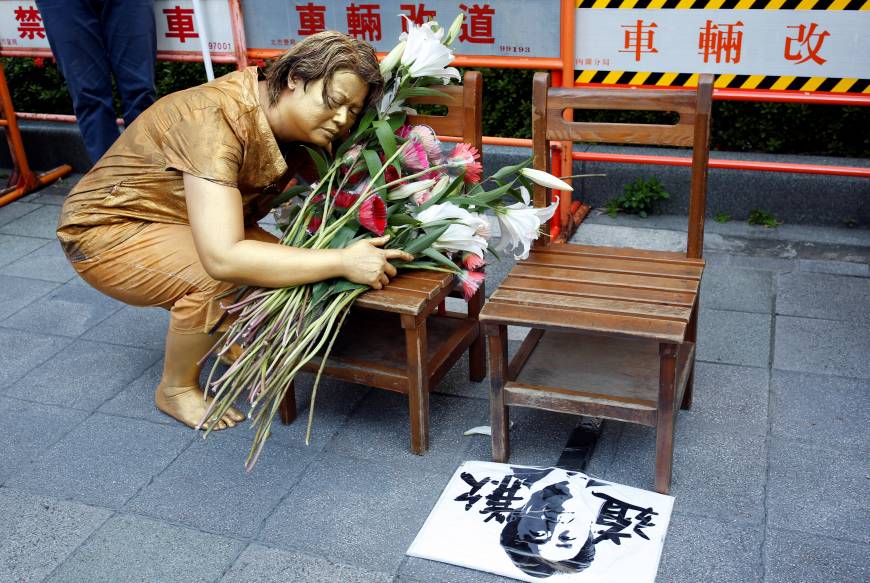 This month, the Ama (grandma) Museum will open in Taipei. It will be a venue dedicated to Taiwan’s wartime “comfort women” who provided sexual services under duress at Japanese military brothels.
The opening of such a museum is surprising because Taiwanese tend to have a more favorable view of their experience under Japanese colonial rule than South Koreans, and a recent poll conducted by Japan’s Interchange Association in Taipei — the de facto Japanese Embassy — found that Japan is Taiwan’s favorite country. These positive perceptions will probably persist regardless of the Ama Museum, a teaching and reconciliation center, but it is another sign that Japan’s history of sexual slavery can not be erased.

Why now? The museum’s opening comes on the heels of the December 2015 deal between Tokyo and Seoul, which requires Japan to provide ¥1 billion to assist Korea’s few remaining victims.
During a March ceremony dedicating the Ama Museum, Taiwan’s outgoing Kuomintang (KMT) president Ma Ying-jeou invoked the South Korea-Japan agreement, stating, “Taiwanese comfort women were Japanese citizens during the war. And they deserve equal treatment.”

Is Taiwan also seeking a payout? Kang Shu-hwa, executive director of the Taipei Women’s Rescue Foundation (TWRF), which opened the new museum, demurs. Since 1992, the TWRF has been actively addressing the issue of wartime forced prostitution by helping the women involved obtain financial support from the Taiwanese government and seeking justice in the Japanese judicial system by arranging pro-bono legal services.

Planning for the Ama Museum began a decade ago after TWRF had exhausted all legal avenues. To avoid accusations of political manipulation, Kang says she has not taken any donations from the KMT or affiliated organizations. Overall, the KMT has a pro-Beijing bias, and taking donations from it would suggest the museum is being used to fight bilateral history wars. Kang says she has no such intention.
In 1992, TWRF opened a hotline to help identify former comfort women and certified 58 survivors out of an estimated total of 1,000 Taiwanese involved; today, only three remain. They all came from poor families and were often recruited through deception, intimidation and coercion, but in some cases desperate families sold their daughters to brokers. Kang told me that these families were required to cooperate with a directive from the Japanese colonial government aimed at mobilizing young unmarried women for the war effort.

A powerful documentary produced with TWRF in 1998, “A Secret Buried for Fifty Years,” presents the stories of 14 of these women — some as young as 15 at the time. They were told their job would involve cleaning and cooking, but they were also required to provide sex. The stigma of forced prostitution left them traumatized and unable to reach out for moral support or consolation.

Many Taiwanese women were sent to Japanese military brothels (called “comfort stations”) around Southeast Asia. They were virtual prisoners and thus enslaved as sex workers. Survival was a grim ordeal, but their nightmare continued after returning home as they coped with lingering physical and mental wounds. In the documentary, we meet a woman who shared her past with her husband, only to find that he could not handle his jealousy and promptly divorced her. Others just hid their secrets while raising a family and some just avoided marriage.

Kang says that many Taiwanese wrongly assume these women were prostitutes. Japanese, she believes, have also been misled by manga artist Yoshinori Kobayashi’s baseless portrayal of Taiwanese comfort women volunteering to console Japanese soldiers in his manga series “Senso-ron.” Kang says there is too much attention on how women were recruited when the main educational focus should be on how they were systematically mistreated, denied freedom and basic human rights.

Taiwan’s President Tsai Ing-wen, the country’s first female leader, has taken steps to address historical grievances, but not the system of wartime forced prostitution. Kang hopes Tsai will, but was disheartened when Taiwan’s Premier Lin Chuan remarked in July that Taiwanese women volunteered to become “comfort women.” He later apologized for his remarks, suggesting that his view does not pass public muster. Tsai’s Democratic Progressive Party seeks close ties with Japan to counterbalance China, however, so it’s unclear how far she will go on an issue that remains marginal in public discourse.

Kang wants to focus attention on the human rights violations of the “comfort women” system that persist with contemporary human trafficking. Back in 1995, the TWRF successfully lobbied the Taiwanese government to provide funds for survivors, all of whom rejected the compensation the Japanese government was offering through the Asian Women’s Fund (AWF). This support came under President Lee Teng-hui, often considered to be one of Taiwan’s most pro-Japanese leaders.
Beginning in 1998, TWRF backed lawsuits filed in Japan demanding compensation for Taiwan’s surviving victims, but in 2005 the Supreme Court upheld rulings that rejected the case due to the statute of limitations. It was then that Kang decided to establish a museum — its recent opening has nothing to do with Japan’s 2015 settlement with South Korea.

Raising money for the museum has taken time because many firms don’t want to antagonize Japanese business partners, but Kang finally reached her goal, thanks in part to donations from Japan.
The spacious 500 square-meter museum occupies a restored two-story brick building located in one of the downtown areas frequented by Japanese tourists. The first-floor coffee shop and education center opens on Sept. 20 while the permanent exhibition on comfort women opens on Dec. 10, International Human Right’s Day. Currently, TWRF has no plans to sponsor a comfort women statue, which is welcome news for Prime Minister Shinzo Abe given that his tenure as Japan’s leader has coincided with an international boom in such memorials.