2015: The Plight of Refugees in Japan 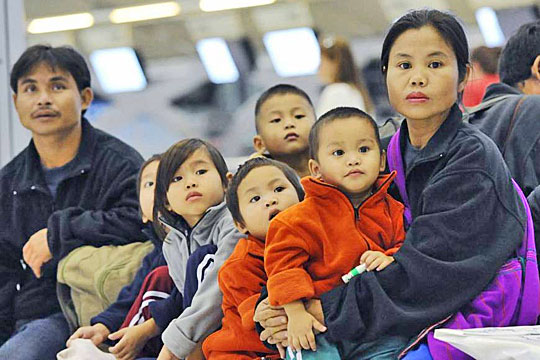 Fresh start: Myanmar refugees transit in Bangkok as they traveled to Japan under a U.N.-sponsored third-country resettlement program in 2011. | KYODO

Home away from home: the plight of refugees in Japan

Asylum seekers face a long, cold winter, with many left in limbo while their applications work their way slowly through the bureaucracy that has been set up to prevent abuse. We examine whether the system needs an overhaul

On a cold winter’s day in December, an African man sits in a meeting room at the Japan Association for Refugees, a nonprofit organization in Tokyo. The man, whose name and country of origin have been withheld to protect his identity from those who wish him and his family harm, has been seeking refugee status in Japan since 2008.

Stacked with boxes filled with winter clothing, sleeping bags and blankets, the room is a refection of the difficult lives asylum seekers face in Japan. Back in his home country in Africa, the asylum seeker was a key member of an opposition party that was campaigning for democracy. He claims to have been detained and tortured by ruling party officials, and says his family was attacked, resulting in the tragic murder of his uncle. Fearing for his life, he managed to get out of the country with a little help from a Christian church group and made his way to Japan.

The African man’s political asylum application has been rejected twice, and he is currently waiting to hear the result of his third attempt. He has also fled a lawsuit against the government in a bid to overturn the rejection decision.

“No matter what I say or what information I give, the answer is always the same — rejection,” he says. “It is very stressful and I think it is very hard to imagine (the situation I am in.) There is no end to this cycle and it is not changing.”

Japan is a signatory member of the 1951 U.N. Convention and 1967 Protocol Relating to the Status of Refugees, under which nations are obligated to give protection to refugees. Article 1 of the treaty defines a refugee as someone who has a “well-founded fear of being persecuted for reasons of race, religion, nationality, membership of a particular social group or political opinion.” Separately, Japan is officially set to start a third-country resettlement program to help refugees who have fed their homes and are living temporarily in camps this year.

According to the Office of the U.N. High Commissioner for Refugees, there were 51.2 million refugees and internally displaced people in 2013 around the world, the highest number since World War II ended almost 70 years ago. Of that number, the recent violence in Syria and Iraq has produced more than 12 million, a situation that the high commissioner of the agency, Antonio Guterres, described as a “mega-crisis” during his recent visit to Tokyo. To assist global initiatives to help refugees, Japan was the second-largest fnancial contributor to the UNHCR after the U.S. in 2013.

However, the reality inside Japan couldn’t be more different. In 2013, only six refugee applications were approved out of a record-high 3,260 submissions. Fifty-six Syrians have unsuccessfully applied for refugee status since the civil war broke out in 2011, although 34 were granted special residency permits based on humanitarian grounds. The number of refugee applications for 2014 had topped 4,500 by the end of November, with Japan Association for Refugees representative Eri Ishikawa predicting that the final annual figure would be around 5,000. However, she says, successful applications were unlikely to break into double digits.

“There are many people falling through the cracks,” Ishikawa says. “The refugee recognition system should be protecting refugees but the reality is that it isn’t. “

Under the Refugee Recognition Law, the Immigration Bureau investigates each application, with the justice minister ultimately making the final pronouncement. If the application is rejected, those seeking protection have the right to appeal. The minister can also grant special residency permits based on humanitarian grounds to unsuccessful applicants. However, the system has been criticized for its lethargic processing speed, lack of transparency and low approval rate.

An advisory panel was convened for the first time in November 2013 to review the system and recommend improvements that could be made. After more than a year of deliberation, the panel concluded at the end of December that the government should introduce an official system to help those who do not qualify as refugees under the U.N. convention but need some degree of protection, including war refugees and women from countries that still follow the custom of female genital mutilation. It also proposed that the government should clarify the criteria it uses to determine refugee status and improve credibility by referring to documents issued by the UNHCR and other international practices and precedents. This proposal will be part of the Justice Ministry’s immigration policy review, which the government aims to hammer out by the end of the fscal year in March.

Michael Lindenbauer, the UNHCR representative in Japan, welcomes the suggestions, stressing that his agency is ready to share its expertise to ensure the ministry can process applications promptly and accurately. While the number of overall applications in Japan has increased sharply in recent years, it is still manageable when compared to other countries, he says.

“A well-functioning asylum system should easily be in a position to manage such numbers and there is no need for panic,” Lindenbauer says. “There is no reason why Japan could not have a system where decisions are made quickly. It is also very important for the refugees to have a very quick assessment of their case and for there to be a clear integration process.”

The government has struggled to come up with ways to weed out genuine refugee cases from people seeking protection in an attempt to come to Japan for work.

For many years, asylum seekers were prohibited from working. However, a revision to the law in 2010 allowed applicants to seek employment if they had valid visas at the time they fled the applications and the process took longer than six months.

Some immigration experts believe this shift in policy has led to the sharp rise of the number of applications the ministry receives each year, with some people fling multiple submissions in order to avoid deportation. Lindenbauer says the screening process should be conducted based on information from a variety of sources. The UNHCR office headquarters in Geneva, for example, has access to an extraordinary amount of information and analysis on most countries of origin as well as experience in handling 200,000 refugee applications in just 2013 alone. Nongovernment organizations can also provide insightful data. Governments’ foreign affairs reports can also be useful, Lindenbauer says, adding that details in these reports should sometimes be carefully examined due to the fact that some take into account the impact on bilateral ties.

“Getting information on countries of origin sounds very simple but it is a very complex area,” Lindenbauer says. “(With such information) you have an opportunity to check because that is critical in order to establish the credibility of the case … to make sure you have good decisions and that you are actually protecting those who are in need of international protection.”

Japan’s recognition rate is extremely low compared to other countries. According to data compiled by Japan Lawyers Network for Refugees, tens of thousands of refugees were recognized in the U.S. and Europe in 2013.

Even in South Korea, 57 were given refugee status, including 10 who won their bids through lawsuits.

Lawyer Shogo Watanabe, a member of the Justice Ministry’s advisory panel and head of the lawyers’ network, says he understands the need to prevent fraud but it was important to prioritize the criteria for refugee recognition. “There is clearly something wrong with the system if only six refugees were recognized (in 2013),” Watanabe says. “Japan needs to set an objective standard to hand down fair and accurate decisions and the criteria should be established with the assistance of the UNHCR. This is the best way to prevent the system from being abused.”

Watanabe has been helping asylum seekers in Japan since the early 1990s. His specialty is dealing with applicants from Myanmar. Of all refugees recognized in Japan in the past couple of decades, the majority have been from Myanmar. While Immigration officials stress that all applications are judged on a case-by-case basis, no asylum seeker from Turkey, which has very good bilateral ties with Japan, has yet to be given refugee status despite having the highest number of applicants. “How can we discuss whether or not the system is being abused if we don’t even know whether the decisions currently being handed down are accurate?” Watanabe asks. “What if applicants who are deemed to be abusers are actually refugees?” The application process can take, on average, anywhere from a few months to several years, meaning that many asylum seekers are caught in no-man’s land.

Life for asylum seekers in Japan is not easy. Nongovernment organizations such as the Japan Association for Refugees offer assistance in food, shelter and clothing, but their resources are limited. Some end up homeless and the Japan Association for Refugees has even had asylum seekers sleeping in its offce hallways during office open hours to escape the painfully cold winters. When the office closes at night, they roam around the city streets, taking small breaks at convenience stores, stay at McDonald’s or 24-hour Internet cafes, or sleep in parks.

Immigration officials sometimes direct asylum seekers to the Japan Association for Refugees for support, but Ishikawa says the situation is not ideal. “It is good that we have formed a sort of trusting relationship or partnership with the government, but the responsibility of this sort of support for refugees should lie with the government and not NGOs,” Ishikawa says. “The government needs to make sure that there are no holes in the safety net.”

Life in Japan for the African asylum seeker hasn’t been a walk in the park either. He is not allowed to work so has no money. He lives in a very old apartment at the kindness of his landlord, whom he repays by cleaning rooms. Last winter, he came to the Japan Association for Refugees shivering because his electricity and gas had been cut off. Despite his hardships, he has made many Japanese friends who support him. They have written letters to the government asking that he be given refugee status, or some other permit to stay.

The African man, who has been continuing his pro-democracy activities in Japan, worries about his future. “We refugees need help but I don’t know what is going to happen next. I’m afraid I could be deported. If this is the fate of refugees in Japan, it is very sad,” the man says. “The Japanese people are good, but the system needs to be overhauled. I am starting to lose hope.”