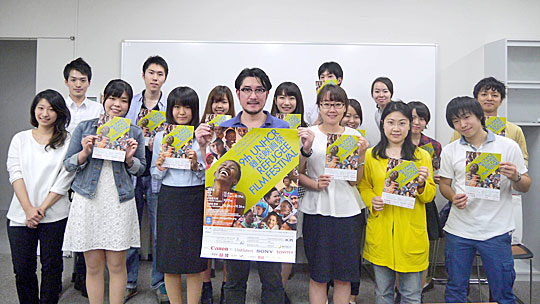 ‘Refugees should have the same opportunities in life as everyone else’

What do Nobel laureate Albert Einstein, composer Frederic Chopin, war photographer Robert Capa and psychoanalyst Sigmund Freud have in common? They were all refugees.

The reality, however, is that very few refugees around the world have access to college education. In Japan, a country that generally takes a tough stance on immigration, some universities have signed partnership agreements with the office of the U.N. High Commissioner for Refugees in Tokyo to provide scholarships for refugees in order to give them an opportunity for higher education.

Jafar Atayee from Afghanistan is one of them. A third-year student at Meiji University in Tokyo, he is enrolled in an all-English course at the college’s School of Global Japanese Studies.

Atayee was born in 1990 and grew up in the power vacuum that followed the Soviet Union’s withdrawal from the Central Asian nation. Coming from a Hazara ethnic background, he spent his childhood days hiding from the Taliban, who were openly targeting people of his ethnicity. “I cannot forget those difficult times,” Atayee recalls. “I still wake up sometimes sweating and shivering.”

Atayee, his mother and three other siblings arrived in Japan in 2009 to join his father, who had applied for political asylum. The bid was ultimately rejected but his father was given a special residency permit based on humanitarian grounds. With no financial support from the government for the family of six, however, Atayee says life in Japan for his family was also extremely difficult. Yet, his father refused to let Atayee give up on his dream to go to university — and that was when he found out about the refugee scholarship program at Meiji University.

“I finally had hope for higher education,” the 24-year-old Atayee recalls. “I didn’t care what it was going to take, I was going to compete for this.”

Meiji University has been accepting refugees since 2011. Seven students, including Atayee, are currently on the refugee scholarship program. The college has also been used as a screening venue during the annual Refugee Film Festival.

“Refugees should have the same opportunities in life as everyone else but, unfortunately, these opportunities are very limited through no fault of their own,” says Takashi Torii, vice dean for academic affairs at Meiji University. “Through this scholarship, I want to give them an opportunity to choose — what they do with it is entirely up to them.”

Nayyi Tin Win graduated from Aoyama Gakuin University in the spring of 2014.

A Myanmar native, she came to Japan when she was 8 after her father was given refugee status for being a journalist and a member of the National League for Democracy, working closely with opposition leader Aung San Suu Kyi.

Back home in Myanmar, Tin Win had come from a well-off family but life in Japan was far from that. Her parents worked at an autoparts factory eight hours a day in Gunma Prefecture trying to make ends meet and raise three children in a country where neither of them spoke the language. However, her father also refused to let his children give up on their education. To her parents’ delight, all three siblings have obtained scholarships and graduated from universities in Japan.

“I love to study and the four years I spent at Aoyama Gakuin was so fulfilling. I am just so grateful for having been given the opportunity to study there and I want to repay my gratitude by doing something that will help others,” says Tin Win, 23, who has been a volunteer interpreter between Myanmarese and Japanese since junior high school.

Upon graduation, Tin Win landed a dream job at one of the country’s leading staffing agencies. Within a few months, however, she began to question some of the ethics of the company, and her health deteriorated as a result of stress. She had conflicted feelings because she didn’t want to be seen as a quitter but, in the end, she decided to leave her job and become a teacher — a decision she doesn’t regret.

“I realized it isn’t about fame. … I now feel I am actually making a difference in these students’ lives,” Tin Win says. “I really know how hard it is to live a life as a refugee but the important thing is not to give up. Possibilities will open up if you make the effort and you will be able to make a change.”

Meiji University’s Atayee faces even more challenges and is now living in Japan on his own. His family was unable to survive here and have since settled in another country. However, Atayee has not completely lost hope. He is currently studying hard and trying to find a way to go to graduate school so that he can eventually get a job at the United Nations or a nongovernmental organization. “I understand how difficult it is going to be but it is my dream,” he says. “I am a refugee and I know what it is like to live in such difficulty.”

From fashion shows and refugee restaurants to futsal and tutoring, an increasing number of university students are engaging in activities to support refugees in Japan.

J-Fun Youth is an intercollege group of about 30 students who wish to create a better society for refugees and raise awareness of their situation in Japan. The group holds an event every year to commemorate World Refugee Day on June 20. In 2013, for example, the group hosted a fashion show titled “Why Blue?” in Tokyo’s fashionable Harajuku district, in which 20 students designed and modeled various ethnic costumes based on the U.N. shade of blue. Last year, the group focused on food, holding “Nan Michelin” — a play on the words nanmin (refugee) and the Michelin food guide — that introduced dishes from Myanmar, Africa and Vietnam.

Another key activity J-Fun Youth hosts is academic support for children of refugees. Every Saturday, some members gather to help about 10 children in elementary and junior high schools with their homework and school studies.

“We want to do something to raise awareness of refugee issues among college students so that when they graduate and become full members of society, they will always have a connection to this issue,” says Erika Tanaka, who currently heads J-Fun Youth.

The 20-year-old law student at Hitotsubashi University is studying to become a lawyer so that she can give legal representation to asylum seekers in Japan, many of whom are denied refugee status by immigration officials. “Refugee issues are not happening in a country far away, there are people in Japan in need of protection,” Tanaka says. “These refugees are not protected by anyone and someone has to do it.”

Refugee Exchange Project is a group of Waseda University students that holds various events related to refugee awareness. The group organizes a futsal tournament in June each year titled “One Ball, No Border,” in which teams comprising refugees, asylum seekers, lawyers and elementary school students compete against each other.

The group also meets several times a month to play futsal against a team of Myanmarese refugees and asylum seekers.

“Futsal is a way for us to interact with refugees,” says Kensho Ueda, head of the Waseda group. “Many people in Japan don’t know about refugees and we hope that through our activities, we can provide opportunities so that people can become aware and support refugees.”

The students consult with chefs at the school cafeteria and prepare several types of dishes from “Flavors Without Borders,” a cookbook published by the Japan Association for Refugees that introduces recipes of refugees from 15 different countries and regions. The project is proving to be a hit among the students, selling hundreds of meals at a time.

Collaboration with Fast Retailing Co., which collects used clothing from shops such as Uniqlo and donates them to refugees abroad, is also spreading among universities. Anna Tamura, a third-year student at Meiji University who has been leading her university’s refugee support activities, says her group is able to help both refugees in Japan and abroad through clothing donations and special menus.

Tamura’s interest in volunteer work was triggered by the March 11 earthquake and tsunami in 2011 that destroyed the Tohoku region, which occurred the day after her high school graduation. Tamura had never met a refugee before starting university, but she became friends with a few refugees on campus who were studying under a special scholarship. “Before university, I would see refugee camps on the news and feel a bit sorry for them,” Tamura says. “However, I’ve come to realize that was a bit condescending. Having since hung out with refugees, I now realize that they are just like us. I’m hoping our activities can contribute to make life in Japan a little bit easier for them, so we can all live in this country together.”