Buraku Liberation
Let Light Shine on All of Humanity 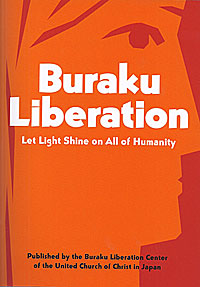 Published by the Buraki Liberation Center of the
United Church of Christ in Japan
Kimura Keibunsha, June 2015, 194 Seiten

The Liberation of the Buraku - Liberation from all forms of discrimination. This has been our ardent hope since the Buraku Liberation Center (BLC) of the United Church of Christ in Japan (UCCJ) was established. But, in the hearts of all those who experienced discrimination, the desperate hope of liberation has been burning like a charcoal fire from ancient days, long before the Center existed. However, discrimination is like a sudden tsunami that strikes poor, weak, and marginalized individuals and pushes each one to the edge. It is almost impossible to push back the muddy stream and raise the voice of objection without knowledge or back up. Therefore, most of the time, the charcoal fire in suffering hearts simmered quietly. However, there were people in whom the fire became a flame and they stood up against discrimination. Their powerful action became the Buraku Liberation movement and brought forth the birth of Suiheisha. What gave people the strength to stand up against discrimination was the interaction and solidarity among people in anguish. Though each fire was small, it became a huge flame when those gathered together looked towards the same goal.

Nowadays, the movement has expanded and a number of groups are working together in solidarity. We have come to realize that there are so many kinds of discrimination that people suffer from and fight against. We have also realized that those people need to be connected and, now, this movement transcends denominations, religions, and national boundaries.

The connection between EMS (Evangelical Mission in Solidarity) and BLC is one example of working together beyond national boundaries and it began with Rev. Andreas Hoffmann-Richter. He learned about the Buraku Liberation movement in the Kyoto District of UCCJ, and has joined in the Liberation Center's activities. We are grateful for his participation, and, what is more, his action in Germany gave US cause for great joy. He connected the Buraku Liberation movement and the discrimination towards Sinti and Roma peoples, and has been involved in his own liberation movement in Germany. This led Kazuhiro Tanimoto, Masato Seki, and Jo Kawakami from the Liberation Center of Kyoto District to visit the EMS office in Germany in September 2002 and meet with Sinti and Roma people. They have written in detail about their experience in this book. We see the light of liberation when people meet, are changed, and connect with one another. Since then, the BLC has paid attention to the problem of discrimination against the Sinti and Roma. In 2009, Kei Mizutani and Heiwa Kataoka were sent to EMS from BLC and had a chance to learn about the Sinti and Roma and the Holocaust. Their experiences were shared at many gatherings in Japan and brought us stimulation and encouragement. Next, Makoto Higashitani, Miki Tanimoto and I were sent to Germany in October of 2014.

Through having such a relationship with EMS, we received an e-mail from them, which mentioned that Italian Waldensians had decided to financially back up the social support projects of EMS, and EMS had recommended BLC as one of the projects. It said that if BLC agrees and submits an action plan, they would contribute 59 thousand euros. At the present rate, that is about 8 million yen which is a little more than the annual budget of BLC. We were surprised and, with even greater joy, accepted their endorsement. Italian Waldensians were declared heretical and even massacred by the Roman Catholic Church in the Middle Ages. Waldensians obeyed the Bible and lived a simple life, and were critical of the Roman Catholic Church that was corrupted by wealth and power at the time. That was why Waldensians were declared heretical. However, now they are accepted as a Protestant denomination. We were glad that those who suffered from discrimination and oppression historically understood the activities of BLC. We soon drew up 14 projects and suggested them to EMS. Out of 14 projects, ten were accepted and received support. The study tour to Germany in 2014 is one of the ten, and another is this book's publication.1

As I mentioned at the beginning, although there are now many organizations working for liberation from discrimination, it is a single individual who is driven into a corner when discrimination occurs. We need to encourage those who are suffering, and to tell them that there are others to fight with them. The internet has made words and information into waste. Too much information buries the words that are really needed. Regardless of the advances in research techniques, an important message floating in an ocean of information cannot reach those in need. Because now the time is overflowing with words and information, we want to deliver words of strength that have fought and survived discrimination.

Lastly, I would like to thank the Waldensians and EMS for their support in giving us the opportunity to publish this book.

' The other eight projects were the 17th Buraku Liberation Youth Seminar, Youth Seminar Reunion, a play about Buraku Liberation, the Fourth National Activists Conference, the screening of the movie SAYAMA - The Fight Against Invisible Handcuffs and a lecture by Mr. Ishikawa, consultations on human rights education in theological schools, publication of the BLC bulletin "For a Good Day", and publication of the BLC English bulletin "CROWNED WITH THORNS". 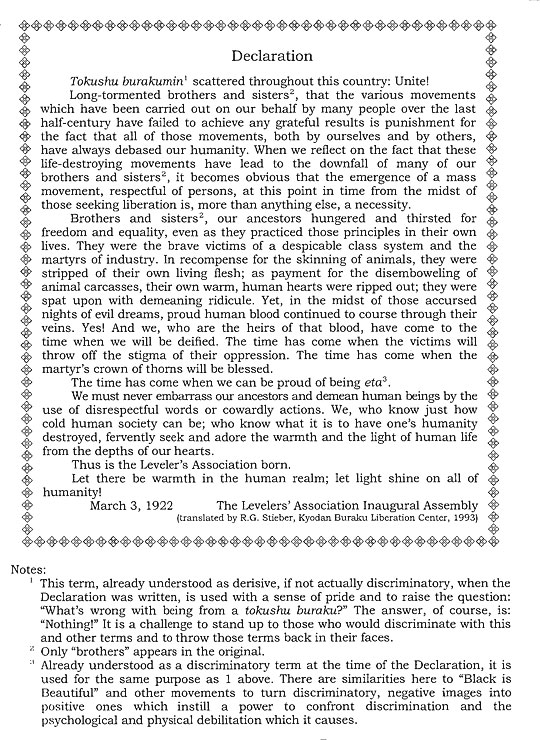