Der Tozanso-Prozess: Church Leaders Call for an Inter-Korean Confederation Prior to Reunification

International Consultation on Peace, Reconciliation and Reunification of the Korean Peninsula: Towards an Ecumenical Vision beyond the Tozanso Process

Church Leaders Call for an Inter-Korean Confederation Prior to Reunification

CHURCH LEADERS CALL FOR AN INTER-KOREAN CONFEDERATION PRIOR TO REUNIFICATION

Nearly 140 leaders from the world's churches, North and South Koreans among them, have called for the formation of an inter-Korean confederation even before complete reunification of the Korea can take place. Agreement was reached at the close of a three-day meeting in Tsuen Wan, Hong Kong where the Christian leaders expressed unrelenting hope for peace and reconciliation among Koreans, despite the stark realities of the ongoing division of the Korean peninsula.

The call for a confederation came in a communiqué developed by the group at the end of their international consultation on Korean reunification. The "Tsuen Wan Communiqué" says the confederation option would involve progressive steps such as peaceful co-existence and the furthering of economic cooperation between the two Koreas.

The proposal for an inter-Korean confederation was presented to the group jointly by church leaders from North and South Korea on the final day of deliberations.

The "confederation system would respect both governments", said the Rev. Kang Yong Sop, chairman of the Korea Christian Federation of North Korea, in a presentation to the group on Friday morning.

"North and South Korea must first recognize each other's systems and engage in cooperation in any field possible, and institutionalize the results," said Suh Bo Hyug, a member of the National Council of Churches in Korea's reconciliation and reunification committee: "Only then will they move closer to reunification."

The communiqué was the outcome of a consultation on peace, reconciliation and reunification of the Korean peninsula held 21 to 23 October 2009, sponsored by the World Council of Churches (WCC) and the Christian Conference of Asia (CCA).

The group explored the geo-political and historical implications of a divided Korea. It also celebrated the 25th year of the Tozanso Process which was initiated by the WCC's Commission of the Churches on International affairs in 1984 as a way to bring Christian leaders from North and South Korea together to encourage the goal of reunification.

The Tozanso Process helped to open the relationship between Christians in North Korea and Christians in South Korea while also involving WCC member churches from around the world.

Most importantly, the Tozanso Process made it possible for Christian leaders from North and South Korea to meet repeatedly over the past 25 years in Switzerland, Macao, Russia, Japan, Germany and at the assemblies of the WCC in Australia (1991), Zimbabwe (1998) and Brazil (2006).

In addition to calling for an inter-Korean confederation, church leaders at the 2009 Tsuen Wan consultation encouraged the international community to allow North and South Korea to enter into direct negotiations to ease tensions between the two countries.

They also called for all sanctions against North Korea imposed by the United Nations Security Council to be lifted, for immediate bilateral talks between the United States and North Korea, and for North and South Korea to implement fully the 15 June 2000 North-South Joint Declaration and the 4 October 2007 Declaration, both of which spelled out a number of goals and steps toward reunification.

During the past decade, however, there have been some setbacks in achieving these goals, as hostility between North Korea and the U.S. has led to the increased militarization of the region. A change in the South Korean government in February 2008 brought revisions to that nation's outlook and policies toward North Korea. There has been a suspension of tourism into North Korea along with a downturn in economic cooperation.

The communiqué urges the U.S. to end its "hostile policies" toward North Korea and advocates for the "cessation of all multinational military exercises in and around the Korean peninsula".

The group closed the communiqué with the "fervent hope and prayer" that the Korean people will be reunited soon. "We long for the day when the people of the Korean peninsula, together with the world, can join together in thanksgiving and joy to celebrate that they are again one people and one nation."

The communiqué will be distributed through WCC and CCA member churches, as well as the broader ecumenical community, and will be shared with government officials in North and South Korea, the U.S., Russia, China and Japan.

In a momentary foretaste of Korean reunification, two Korean pastors - one from the north, one from the south - bridged more than 60 years of separation in jointly presiding over a celebration of the Eucharist during a worship service commemorating more than 25 years of work toward bringing peace and reconciliation to the divided Korean peninsula. The "Tozanso Process", which brings together Christians from the Democratic People's Republic of Korea in the north and the Republic of Korea in the south, as well as representatives of partner churches from other nations, was initiated by the World Council of Churches (WCC) in 1984.

The Rev. Kang Yong Sop, chairman of the Korea Christian Federation of North Korea, and the Rev. Tae Jin Bae, of the National Council of Churches of Korea (South Korea), shared in reading the prayers of holy communion before offering the Eucharist to an ecumenical congregation.

The service was part of an international consultation organized by the WCC and the Christian Conference of Asia, called to celebrate 25 years of churches and ecumenical bodies from around the globe working to pave the way for further cooperation on the issue of Korean reunification.

The Rev. Dr Samuel Kobia, general secretary of the WCC, said in an opening presentation that the people of the entire Korean peninsula are yearning for peace and reconciliation.

"There has been substantial progress achieved in terms of advocacy on Korea during the years since the 1984 Tozanso consultation," Kobia said. He then called on the group in Hong Kong to move the process forward by reflecting "more carefully on what is our vision of peace, justice and reconciliation in its totality".

"We need to envision peace based on the concept of shalom, a vision of justice, peace and reconciliation", he said.

Subsequent gatherings of what was then called the Tozanso Process Consultations have been held with Christians from North and South Korea in Switzerland, China, Japan and Germany, and also during other WCC conferences and assemblies in Moscow, Canberra, Harare and Porto Alegre, Brazil.

While the separation of Korea remains and may be even more tense than it was 25 years ago, the process, at the least, has kept the discussions going within the church and between Christians from North and South Korea.

The goal of this consultation is to set a course for continuing the Christian involvement of the ecumenical community in the reunification of Korea.

The continuation of the separation of Korea means continued instability in northeast Asia. China, Russia, Japan and the U.S. all have regional interests at stake in the Korean situation.

Through 23 October the group plans to look at the issues of peace, reconciliation and reunification from a variety of perspectives, including presentations from China, Russia, Japan, the U.S. and both Korean republics. 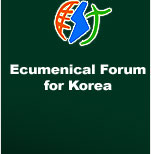