Inter-Korean divided family reunions
to be held between Aug. 20 and 26 at Mt. Kumgang

100 people from both sides to meet face-to-face, according to previous practices 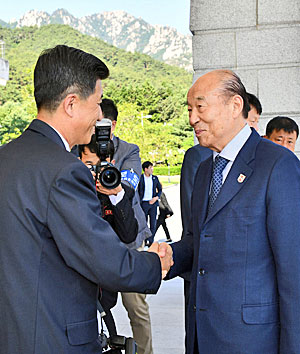 Park Kyung-seo (right), head of the Korean Red Cross and leader of the South Korean delegation, shakes hands with Pak Yong-il, vice chairman of the Committee for the Peaceful Reunification of the Country and leader of the Nort20180623 park kyungseopak yongil 300h Korean delegation, during inter-Korean Red Cross talks on June 22 at the Mt. Kumgang Hotel, where the two sides held discussions concerning face-to-face family reunions set for August. (joint photo pool)South and North Korea have announced that they will be holding face-to-face reunions for families divided by the Korean War between Aug. 20 and 26 at Mt. Kumgang, in line with the Apr. 27 Panmunjeom Declaration in which South Korean President Moon Jae-in and North Korean leader Kim Jong-un promised to hold such reunions around Aug. 15, the day when Koreans celebrate their liberation from Japanese colonial rule. No reunions have been held for nearly three years, since the 20th reunion was held at Mt. Kumgang on Oct. 20-26, 2015.

South and North Korea agreed to abide by previous practices in regard to the scale of the reunions (100 people from both sides) and the method (face-to-face reunions). Since the facility used for reunions at Mt. Kumgang has been neglected for the past three years, the two sides agreed to make the repairs and renovations necessary for holding the reunions there. The plan is for the two sides to request confirmation that family members slated to attend the reunions are alive by July 3, to provide confirmation by July 25 and to exchange the final lists of attendees by Aug. 4. South Korea is planning to send a team of facility inspectors to the site on June 27 to look into repairs and renovations.

Previous face-to-face reunions
The first face-to-face reunion of divided families took place in the form of reciprocal hometown visits on Chuseok (literally “autumn evening,” Korea’s autumn harvest festival) in Sept. 1985, and 20 reunions were held after the inter-Korean summit in June 2000. (There were five reunions during the administration of former president Kim Dae-jung, 11 under Roh Moo-hyun, two under Lee Myung-bak and two under Park
Geun-hye.)

The heads of the two delegations expressed their attitude about the talks in words that evoked the symbolism of Mt. Kumgang, where the talks were held.

Symbolism of Mt. Kumgang
“Mt. Kumgang is a precious place where we can soothe the painful wounds and the mental anguish of our people and seek another opportunity for national reconciliation and unity,” emphasized North Korean chief delegate Pak Yong-il during his opening remarks in a plenary session that morning.

South Korean delegation head Park Kyung-seo responded by saying, “The Red Cross talks must draw upon the energy of Mt. Kumgang and all its natural philosophy to purge the nation’s bitterness.”

All 17 of the face-to-face reunions that have been held since the 4th reunion (Apr. 28-May 3, 2002) have been held near Mt. Kumgang. There were only four reciprocal visits between Seoul and Pyongyang, all of which were held before 2002.

South and North Korea stayed focused on reaching an agreement, with one meeting between the delegation heads and two meetings between the delegations in addition to the plenary session. After the plenary session and the meeting of the delegation heads in the morning, a senior official from South Korea’s Unification Ministry said, “South and North Korea have expressed their respective positions about timing, scale, method and facility repairs and renovations in connection with holding reunions for divided families around Aug. 15.” The remark hinted that the two sides were focusing on the question of reunions.

In fact, the biggest objective of these talks was to continue discussions about Moon and Kim’s agreement “to proceed with reunion programs for the separated families on the occasion of the National Liberation Day of August 15 this year,” as specified in their Apr. 27 Panmunjeom Declaration, and to agree on a schedule for those reunions.

“South and North Korea agreed to endeavour to swiftly resolve the humanitarian issues that resulted from the division of the nation, and to convene the Inter-Korean Red Cross Meeting to discuss and solve various issues including the reunion of separated families,” the statement said.

South Korea showed its determination to bring about the reunions of the divided families by taking the unusual step of having the head of the Korean Red Cross personally lead the delegation to the talks. The only other time that the Red Cross head has led the talks was in Sept. 2002, when then Red Cross president Suh Yeong-hun headed up the delegation. The North Koreans did not confirm the list of negotiators for the talks until 2 am on June 22, the day of the talks, perhaps because they were busy assisting North Korean leader Kim Jong-un with the technical details of six summits that he has held during the past three months.