[Editorial]
U.S. pragmatic timetable for denuclearization within two and a half years 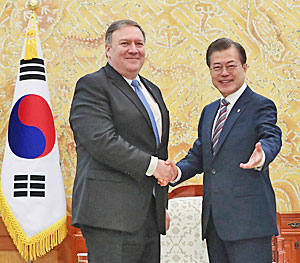 South Korean President Moon Jae-in shakes hands with US Secretary of State Mike Pompeo at the Blue House on June 14 after the latter related the details and results of the North Korea-US summit in Singapore. President Moon and Pompeo also discussed future cooperative measures between South Korea and the US. (Kim Jung-hyo, staff photographer)“We believe that Chairman Kim Jong-un understands the urgency of the timing of completing this denuclearization [and] that he understands that we must do this quickly,” said US Secretary of State Mike Pompeo on June 14.

“Kim Jong-un’s public commitment to completely denuclearize is an important step towards bringing lasting peace and stability to Northeast Asia and indeed to the entire world,” Pompeo said during a press conference after a meeting with South Korean Foreign Minister Kang Kyung-wha and Japanese Foreign Minister Taro Kono at South Korea’s Foreign Ministry in Seoul.

During his visit to South Korea on June 14, Pompeo said that the US hopes to achieve “major disarmament” within “two and a half years,” or in other words by the end of 2020, before the end of US President Donald Trump’s first term in office. “We’re hopeful we get it done,” Pompeo added.

Pompeo’s remarks can be taken as meaning that Trump and Kim reached an understanding during their summit in Singapore about taking legitimate steps toward denuclearization before the end of Trump’s time in office. The remarks about “major disarmament” within “two and a half years” are particularly significant in that they provide a specific timetable for denuclearization, which has been a major source of
controversy.

The fact is that, even before the North Korea-US summit, many nuclear experts have predicted that it would take at least two years for North Korea to denuclearize. In light of those predictions, Pompeo’s remarks are positive since they show that the Trump administration is taking a pragmatic approach about the question of the timetable for denuclearization.

While some are calling for complete denuclearization within the year or even the immediate dismantling of North Korea’s nuclear weapons and intercontinental ballistic missiles (ICBMs), such rushed proposals are not feasible considering that the North’s denuclearization needs to coincide with the US providing the Pyongyang regime with security assurances.

The important thing is straying away from normative and impractical demands. It is much more critical to move forward with a definite stepby-step process of denuclearization based on trust between North Korea and the US. From that perspective, it is not right to attack and disparage the North Korea-US summit in Singapore for not having gotten any results.