Walking into the NCCJ general secretary's office, one might notice among the many books, crosses, posters, and other items that there are a few frogs here and there. Not live ones but pictures, some candy-shaped frogs on the wall, and a frog paper clip holder. Rev. Aminaka likes frogs. Why? "They remind me to F.R.O.G., which means to "Fully Rely On God." The cute green frog picture is on her screensaver as a prayer reminder to rely on God before her workday begins. 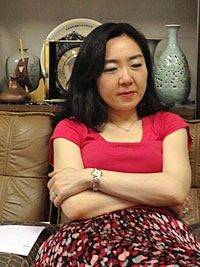 Rev. Shoko Aminaka was born as an only child in Meguro-ku, Tokyo. Her family was not a Christian family, but numerable experiences of the Holy Spirit have guided her life and faith journey to become a Christian and a minister. I will highlight a few of these "coincidences" or rather, "God-incidences" that have impacted her the most.

Her first encounter with Christianity came about as a five-year-old child when her grandfather passed away. Her grandfather had attended the Catholic church in Kamakura, and although he had never been baptized, his funeral was held at the church. Sitting in the pew next to Shoko was a Catholic Sister who comforted Shoko-chan (as she was called back then) and said to her, "Don't worry. Your grandfather is in heaven with God." This made Shoko feel better and at peace.

Her next encounter with Christianity was when her parents put her in a mission school, called Toyo Eiwa in Roppongi, Tokyo. Toyo Eiwa was founded by a Canadian missionary and considered a good school. Shoko attended chapel and was taught English by a Canadian missionary named, Ms. Rogers, in second grade. Shoko especially remembers how much she enjoyed the English spelling games! She spent 12 years at Toyo Eiwa – from elementary to high school. It was during elementary school that she first started to attend church Sunday School at Keisen Baptist Church. (When she became a general secretary of NCCJ, she met Mr. Zushi Minoru who was the chair of the NCCJ Yasukuni Shrine Committee. It turned out that he remembered her as little "Shoko-chan" at Keisen Baptist church where he was a member!! )

When Shoko Aminaka reached junior high, she was expected along with other youth to attend the adult worship. However, she found it wasn't as interesting as Sunday School, so stopped going to church for awhile. It was in her third year of junior high that she felt called to go back to church. In her own words, she recalls discovering that "God had given life to me" and that "we are given a life from God and then go back to God when we die." This time she attended Hijirigaoka Church which was part of the UCCJ (United Church of Christ in Japan or Kyodan). The pastor was Rev. Yamakita and he baptized her at the age of 15 on Christmas Day. She spent the following 25 years at that church.

Shoko went to university in Ikebukuro, Tokyo. The university, St. Paul, or Rikkyo University, is where she majored in Christianity, Kirisutokyo Gakubu. Rikkyo University is affiliated with the Anglican/Episcopal church. Shoko remembers hearing a lecture from Rev. Koshiishi who was a pastor and part-time lecturer at Rikkyo. (Later, Rev. Koshiishi was the moderator of NCCJ, from March 2009 to March 2012.) He could not recall having had Shoko in his lecture as there were a number of students, but was very surprised to hear that she remembered him! Many years later, they now meet again through her work as the general secretary of NCCJ. This was another God-given "coincidence."

After graduating from Rikkyo University, she worked as an assistant director at E.T.V. (educational television) which is the educational channel under NHK Broadcasting. She was in charge of the Sunday-aired program that featured museums in Japan. Shoko Aminaka recalls the first day she went to NHK and saw a Bible displayed there, the reason being that NHK also featured a religious program called "Kokoro no Jidai" ("The Age of the Heart"). The staff of the program on museums and the religious broadcasting program both shared the same office space. Shoko thought this was a providence and remarked, "Jesus is always with me anywhere I am!"

Later, she discovered in an unusual way that her boss at the T.V. station was also a Christian. In 1995, while working for educational T.V., the Aun Shinrikyo sarin gas attack on the subways happened. Shoko wondered, along with many others, how someone who claimed to be religious could do such a horrible thing. Asahi Newspaper had written an article about Aum Shinrikyo and then asked its readers to write a piece with their opinions about science and religion. Shoko Aminaka took this opportunity to write and submit an article. Asahi Newspaper chose her opinion piece to publish in their newspaper. The main point of her article was that science answers "how" but religion answers "why," explaining that science cannot answer why the earth was created; only how. Her boss read the article and commented to her that he liked it. In the process, she discovered he was also Christian (although she had earlier suspected he was Christian due to his unusual first name). Again, another "God-incident."

Shoko Aminaka stayed for five years at NHK Broadcasting creating T.V. programs. She got very good at being time-conscious since programs must end very punctually. She laughs and said, "this later helped me as a preacher, as when I asked at the church how long I should preach, I could always stay within the time limit!"

Shoko's next job took her to UCCJ main office at the Japan Christian Center in Tokyo where she became the assistant to the general secretary, Rev. Yamakita, the man who had baptized her. He had been a mentor for her. Shoko worked at UCCJ headquarters for seven years. It was while working there that she started what is known in UCCJ as the "C" course and began her studies to become a pastor. (Note: This is a rigorous course of study for people to become pastors who do not or cannot attend seminary full-time.) After studying for three years while working full-time, she took the exam to be licensed as a local pastor. She felt her education while working was very valuable, as she could ask many pastors who came by the UCCJ headquarters various theological questions. She became a licensed pastor of Hijirigaoka Church and continued working. Sundays became very busy as the church had both morning and evening services. She not only often preached, but also taught the junior high school youth.

Shoko Aminaka's ordination was at Hijirigakoa Church in 2007. There were many pastors from many of the Kyodan districts in attendance whom she had gotten to know through her work at the UCCJ head office. One pastor even joked that he hoped nothing bad would happen since the UCCJ would be at a loss with so many pastors in one place at one time! Shoko said she felt truly blessed at her ordination by so many pastors and lay people who had supported her over the years.

In 2008, Rev. Aminaka became the pastor of Bethel Church which is UCCJ/Kyodan. She said, "I really spent happy days there. God was leading  the church and I was able to have the wonderful blessing of baptizing four new members there. However, I suddenly had to resign from Bethel in March, 2012 because I was asked to come to NCCJ, so they do not have a new pastor yet. Please pray for the church."

When asked why she started her studies to become a pastor in the first place, she answered that it was because of the 9/11 attack. Everyone was praying for peace and the millennium year 2000 but then this horrible terrorist attack happened. As Shoko watched the news, she saw that the terrorists were using God for evil. Shoko thought she must preach that God is a God of peace and that the Bible teaches us not to kill but to love one another. It was just after 9/11 that she started her studies to become a pastor.

The name, "Shoko" means "to spread" or "to show."  Therefore, her name can inspire her now as the means to spreading the Good News of Jesus Christ along with the message of God's love and peace. "Aminaka" means "net" and "middle." As Shoko reflected on the meaning of her last name, she pointed out that Jesus told the fishermen to follow him. Another "net" connection for her personally is that, although her parents were from Tokyo, her great grandfather was a fisherman in nearby Chiba prefecture.

This scripture, "Come, follow me," Jesus said, "and I will send you out to fish for people." --- Mark 1:17 happens to be the scripture on the NCCJ brochure and the NCCJ General Assembly theme for NCCJ for the three-year term, 2012-2014. When Rev. Shoko Aminaka became the new general secretary in March of 2012, the NCCJ General Assembly was held in St. Andrew's Anglican Church. This is just another example of the many signs of the Holy Spirit. This cannot be attributed to being "mere coincidences" but rather, "God incidences." It truly exemplifies God's plan  that she is where she needs to be at this point in her life.

In her closing thoughts about being the new NCCJ general secretary, Rev. Aminaka said that although she had not done much ecumenical ministry prior to coming to NCCJ, she has been enjoying learning more about the ecumenical movement and NCCJ ecumenical partners. She has also found it very meaningful to meet and work with religious leaders of various denominations and faiths, of special importance since the triple disaster in Tohoku.

Rev. Aminaka and NCCJ have been busy preparing for the Inter-religious Conference on Nuclear Issues in Fukushima, which will be held December 3-7. The main focus of the conference is to share the current situations of people in Fukushima and to discuss the issues on nuclear energy. The Conference also aims to highlight issues related to the 2013 World Council of Churches' general assembly in Pusan. Rev. Aminaka's hope is that many will come together to learn more about the dangers of radiation and what we, as people of faith worldwide, can do together to heal our world.

As we bring our interview to a close, Rev. Shoko Aminaka looks at her frog screensaver and says, "We can only bring healing, justice, and peace by 'fully relying on God' as we work together."

Artikel 9 der Japanischen Verfassung (offizielle Übersetzung):
Article 9.
Aspiring sincerely to an international peace based on justice and order, the Japanese people forever renounce war as a sovereign right of the nation and the threat or use of force as means of settling international disputes.
(2) In order to accomplish the aim of the preceding paragraph, land, sea, and air forces, as well as other war potential, will never be maintained. The right of belligerency of the state will not be recognized.

Aspiring sincerely to an international peace based on justice and order, the Japanese people forever renounce war as a sovereign right of the nation and the threat or use of force as means of settling international disputes.

(2) In order to accomplish the aim of the preceding paragraph, land, sea, and air forces, as well as other war potential, will never be maintained. The right of belligerency of the state will not be recognized."
(offizielle Übersetzung)

Homepage des NCCCenter-Center for the Study of Jap. Religions ISJP

Aspiring sincerely to an international peace based on justice and order, the Japanese people forever renounce war as a sovereign right of the nation and the threat or use of force as means of settling international disputes.

(2) In order to accomplish the aim of the preceding paragraph, land, sea, and air forces, as well as other war potential, will never be maintained. The right of belligerency of the state will not be recognized."
(offizielle Übersetzung)