Sink the Asahi! ... the Neo-nationalist Attack

Sink the Asahi! The ‘Comfort Women’ Controversy and the Neo-nationalist Attack

How did Japan’s 135-year-old liberal flagship end up in the crosshairs of neo-nationalists?
David McNeill and Justin McCurry

Before last year it is doubtful that many Japanese knew the location of Glendale, California – an L.A. suburb with a population of 200,000 known for its large Asian population and the Big Boy fast-food chain. That’s changed, thanks to an unimposing bronze statue of a young woman installed last year in a local park that has become a microcosm of the toxic history war between Japan and South Korea. 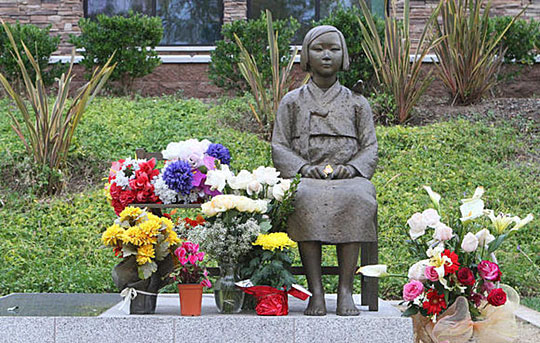 The statue was meant to commemorate the suffering of women herded into wartime Japanese brothels – and to symbolize justice denied. Since the unveiling, however, the city has been targeted by diplomatic protests, hundreds of angry letters and a lawsuit demanding its removal. Japanese nationalist politicians even say the statue has triggered discrimination against Japanese schoolchildren in America.

The dispute took a farcical turn on Oct. 21 last year when Glendale City Council heard testimony from long-winded rightist video blogger Tony Marano. Marano travelled hundreds of miles from his home and took a break from warning against nefarious communists, Koreans who “eat dogs off the street” and President Obama’s plot to turn America into a Muslim nation, to pick up the cudgel against the hated memorial.