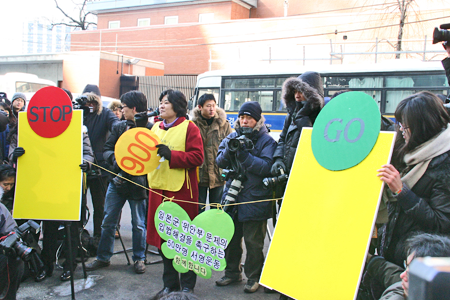 Amnesty International calls on the government of Japan to apologize fully and unequivocally to the survivors of Japan’s military sexual slavery system on the occasion of the 900th Wednesday demonstration in Seoul, South Korea.

Since January 1992, “Wednesday Demonstrations” have taken place every Wednesday outside the Japanese embassy in South Korea. The survivors, human rights activists, students and people from all over the world, have been attending these weekly rallies to show their solidarity and support.

South Korean survivor, Kim Hak-soon, who was the first to speak publicly of her ordeal, has inspired many others to break their silence. These courageous survivors continue to work vigorously to campaign for justice and the promotion of human rights.

The survivors and supporters have traveled around the world speaking to politicians, governments, parliamentarians, students and human rights activists. There is now an international movement of survivors, family members and supporters calling for justice.

Since 2007, the USA, Canada, the Netherlands, South Korea, Taiwan and the European Parliament, which represents the 27 member states of the EU, have all passed resolutions calling on the government of Japan to accept responsibility and apologize for the crimes committed against these women.

In Japan the city councils of Takarazuka, Kiyose, Sapporo, Fukuoka, Mino-o, Kyo-Tanabe, Koganei, Mitaka, Ikoma, Sennan and Kokubunji have all called on the government of Japan to resolve this issue.

However, time is running out as most of the survivors of the ‘comfort women’ system are now elderly and many have passed away. The government of Japan must act immediately to provide redress to those who have suffered.

Amnesty International calls on the Government of Japan to:

- accept full responsibility for the “comfort women” system in a way that publicly acknowledges the harm that these women suffered and restores the dignity of the survivors.

An estimated 200,000 women from 1932 to the end of World War II were forced into sexual slavery. The Japanese Imperial Army preyed on women and girls who, because of age, poverty, class, family status, education, nationality or ethnicity were most susceptible to being deceived and trapped into the sexual slavery system. These women suffered a range of abuses including abduction, gang rape, and forced abortions. Many of the victims are still suffering from the consequences of these abuses.

Messages from Taiwan and Canada:

Congratulations to the world’s longest running demonstration. This is such an amazing record!!

Taiwan Ah Ma and we (Taipei Women’s Rescue Foundation) admire your efforts and persistence! We have visited, seen and participated your demonstration, which is very touching and inspiration to all people and groups from the world to fight against the Japanese government.

During the 900 weeks, we have seen so many victims passed away without receiving the compensation and formal apology from Japanese government. And in the eighteen years, the Japanese Premiers and the ruling party changed numerously and we know most killers and rapists died without guilty or apologies. However, your persistence and continuing protest is at least the voice strut out loud to the world that our will and hope can never be defeated by the Japanese government.

In Solidarity With the Honourable Halmonis’ 900th Wednesday Demonstration

On behalf of Canada ALPHA (Association for Learning and Preserving the History of World War II in Asia), I would like to express our highest respect and resolute support to the halmonis and their supporters who have persistently run the weekly Wednesday Demonstration at the Japanese Embassy in Seoul since January 8, 1992.

For 18 years, you have made the world know that justice is still denied to women drafted for military sexual slavery by Japan before and during World War II; that the survivors and their compatriots will never give up the fight for the final justice, no matter how late it could be; and that Japan will never be trusted nor respected by the victimized nations and the international community without facing squarely its historical wrongs.

For 900 weeks, you have shown to people of the world your determination in defending your rights and dignity, your persistency in pursuing justice and peace, your dedication to the preservation of historical truth, and your perseverance in ending impunity for perpetrators.

Your determination, persistency, dedication and perseverance have set a role model for other war crime survivors in fighting for their causes against the perpetrators and the deniers. You have also erected a moral monument in the minds of people in the world and generations to come.

Young people in Korea and elsewhere of the globe have learned from you how to become responsible global citizens, especially in the times confronted by tremendous unjust situations. We believe that more and more people will take up the torch of peace and justice being carried by you until the final victory is won.

We stand with you in solidarity,

Since Kim Hak-sun of South Korea came forward in 1991 as a former 'comfort woman' during WW2, many victimized women of various countries have also spoken out. However, many women who were abducted and forced into comfort houses for the Japanese military (either through enticement or by force), and endured unimaginable humiliation and sufferings thereafter, have already died, and those still living are now in their 80s or 90s. In 1993, Yohei Kono, the then Chief Cabinet Secretary issued a comment, based on historians' research, saying: ' I offer an apology and feel personal remorse. A further sincere discussion should be held as to how Japan as a nation should express such feelings.'

However, nothing concrete has been done so far by the Japanese government. We, as citizens of a country which caused such harm and suffering, and also as human beings, have only a little amount of time left to materialize our sincerity into actions.
Now that the Japanese government has changed, let us work together to establish a law as soon as possible in order to resolve the problem of the' comfort women' who suffered under Japanese military sexual slavery.

The 18-year-struggle by victimized women has moved the world!

Regarding the issue of 'comfort women', the House of Representatives in the US Congress passed a unanimous resolution in July 2007, which stipulates that the Japanese government should officially acknowledge, apologize for, and accept the historical responsibility for the enforced sexual abuse towards those women. Following this, similar resolutions have passed in the parliaments in the Netherlands, Canada, EU, South Korea and Taiwan. Additionally, some international organizations, includingthe UN and the ILO, have continually issued their recommendations, which had beenignored by the former ruling coalition of the LDP and the Komei Party with an excuse that they had 'no legal obligation.'

This obstinate and insincere attitude on the part of the former Japanese government, which hasd long trampled on the human rights of many victimized women, neglecting its obligation to an official apology and compensations even 64 years after the end of WWII, and ignoring recommendations by international societies, has drawn much distrust from people all over the world.

In Japan, people have spoken out in local assemblies nationwide, demanding a resolution!

In Japan, starting with Takarazuka Municipal Assembly in March, 2008, eleven other municipal assemblies of Kiyose, Sapporo, Fukuoka, Mino-o, Mitaka, Koganei, Kyo-tanabe, Ikoma, Sennan, Kokubunnji,Nagaoka-kyo,Funabashi,Kunitachi, passed their resolutions of recommendation to the Cabinet, requesting the resolution of the 'comfort women' issue. These kind of efforts are now spreading to various places in Japan.

Now is the time for legislative resolution!

A comprehensive solution to this issue will lead to a true reconciliation and peace between the Japanese and people in other Asian countries . It is the duty of the Japanese national government to listen to voices from within Japan and from international communities, so that they will now earnestly tackle this problem and aim for an early legislation.

In the summer of 2009, a new coalition government of the DPJ, SDP, PNP came into power. Of the three parties, the DPJ and SDP, in combined efforts with the Communist Party, have submitted to the Diet, consecutively eight times since 2001, 'a bill for accelerating the solution to the problem of the victims of the enforced wartime sexual slavery.'

We request that the new central government draft and pass a relating bill as soon as possible, in order not to leave this problem unresolved into the next generation. The Japanese government must deliver its heartfelt apology to the now elderly victims, and establish a compensation scheme for these survivors of Japanese military sex slavery during the Asia Pacific War.

We Call for Legislative Resolution of the Japanese Military "Comfort Women" Issue!!

We request that our new central government draft and pass a relating bill without delay, seeking a comprehensive resolution to the "Comfort Women" issue. The Japanese state and its government must not leave this problem unresolved into the next generation. It must deliver an official, heartfelt apology and offer a concrete and comprehensive compensation package to the now elderly victims and survivors of Japanese military sex slavery during the Asia Pacific War.

The National Executive Committee of Urgent 1,200,000 Petition Campaign Requesting Legislative Resolution to the Issue of Japanese Military Slavery during WWII