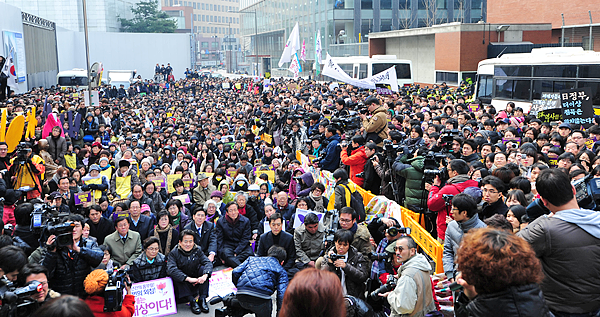 In the morning of December 14th on which the 1000th Wednesday Demonstration was held, we installed the Peace Monument in the demonstration site (Pyeonghwa-ro) in front of the Japanese Embassy. The Peace Monument is a statue of a young girl,which portrayed Halmonies at the time of the adversity, with a little bird on her shoulder. The bird is the medium that connects her with the deceased Halmonies.  The figure of shadow on the ground is not a young girl’s but an old woman’s to symbolize the long waiting for the justice to be restored. And the empty chair next to the girl is for whomever will stand hand-in-hand and raise their voice together.(Many people in Korea are showing huge interests through visiting the monument, taking pictures, and wrapping around a scarf around the girl’s neck.)

And as the time approached 11, people started to stream into the Pyeonghwa-ro. The line of people was beginning to form from the stage, pass the Japanese embassy, and to the end of the street, and eventually packed the place with people who came to be part of the 1000th rally. The media attention was at its intense more than ever. Camera shutters went off from everywhere, and participants were surrounded by reporters.

Starting with Korean traditional music, we sang, listened to speeches (representatives from each political party, nun, students, actresses, etc). The waves of yellow and purple filled the place, and the voices of rightful demands for resolution of the ‘comfort women’ issue resonated through the street. There was also a presentation ceremony of the “hope van”-bought for Halmonies with donations from citizens, which was made possible by the power of Tweeter, and unveiling of the Peace Monument. After the women’s activists read a statement, all stood up and chanted towards the Japanese embassy.
The rally lasted for almost two hours. It was like a split of a second compared to the time spent preparing for it, yet the passion that supporters showed us as one will ever remain in our hearts and also as big hope for Halmonies.. 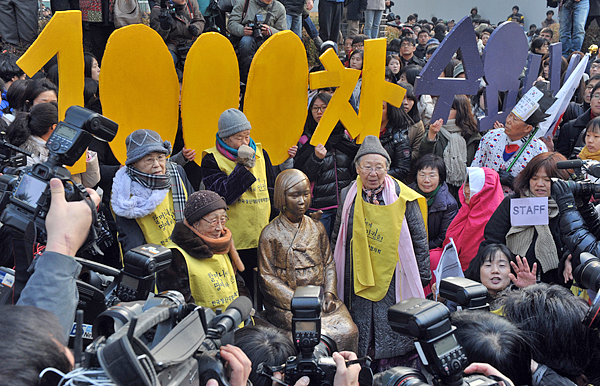 And at the same time, different places in the world rang with cries demanding justice for the victims. About 1300 surrounded the ministry of Foreign Affairs of Japan in Tokyo; Holocaust survivors joined the comfort women victims to demand Japan for an apology in the States; rallies and film screenings were held in 14 different locations in Germany. In Canada, hundreds of people rode on the Canadian version of “Hope Bus” to the Japanese embassy in Ottawa and held a protest. The group “Women in Black” also had a solidarity protest in front of the Leuven city hall in Belgium. Different actions and events took place in other places as well including Japan, the US, the Philippines, Taiwan, Italy, Scotland, Canada to join in demanding restoration of human rights and dignity of the victims. (43 cities in 9 countries as officially tallied)

In Korea, solidarity protests took place throughout the country in 30 cities in all 9 provinces. Incheon Women’s group rallied without jackets on as a performance despite the cold; many schools, libraries, and women’s groups gave children chances to learn about the history and human rights as part of the education week. We believe that our voice that moved Korea and the world will bring resolution of the issue, and further stop war and violence against women.

Again, huge gratitude for all whom has joined us in the cause. We hope that this will not stop here but will lead to stronger solidarity throughout the globe as we go on to our 1001st and 1002nd protests. 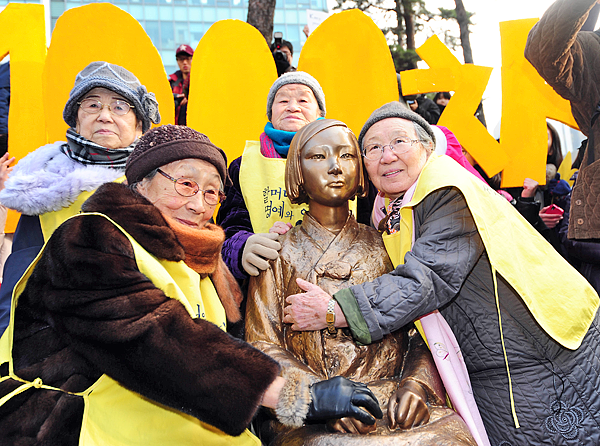