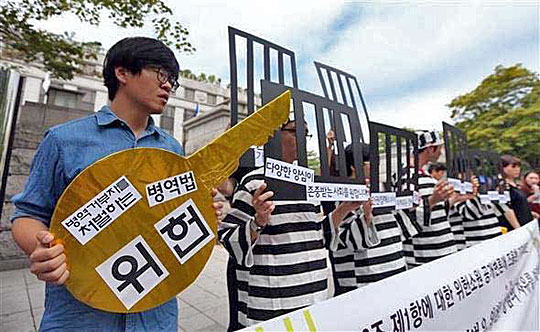 Ahead of a ruling by South Korea’s Constitutional Court on the constitutionality of prosecuting South Koreans who refuse to perform their mandatory military service for reasons of conscience, an appeals court has found a conscientious objector not guilty for the first time in the country. While conscientious objectors have been exonerated a total of 12 times (the first such ruling made by the Seoul Southern District Court in 2004), an appeals court has never made such a ruling until now. This is expected to affect public opinion about introducing an alternative military service program along with the Constitutional Court’s ruling about the section of the Military Service Act that serves as the legal basis for prosecuting conscientious objectors.

On Oct. 18, Hon. Kim Yeong-sik, the judge in charge of the third criminal appeals division at the Gwangju District Court, exonerated two conscientious objectors, surnamed Cho and Lee, who had been charged with violating the Military Service Act. This overturned the ruling of the lower court, which had sentenced Cho and Lee to one year and six months in prison. The judge also upheld the ruling of a district court that had found a conscientious objector surnamed Kim not guilty of the same charge.

South Korean conscientious objectors have been prosecuted according to Article 88, Paragraph 1, of the Military Service Act, which requires those who refuse to report for military duty without justifiable grounds to serve up to three years in prison. Since 2006, 5,215 people have been prosecuted for refusing to serve in the military because of their religious convictions.

The appeals court criticized the central government for not providing an alternative service system and the judiciary for not taking action to protect minorities.

“When the government allows conflict to continue when it could easily take action to end it, it is betraying the promise in Article 10 of the constitution to guarantee the people‘s fundamental rights, and the majority is ignoring real democracy. It is appropriate to create an alternative system of service to provide [conscientious objectors] with an opportunity to proudly contribute and give back to the community without serving in the military,” the judge said in the verdict.

“South Korea’s judiciary has left the task of implementing constitutional values to the legislature and has disregarded the guarantee of minority rights, which is the basic reason that the judiciary exists.

Formulaic rulings [prison sentences of one year and six months] made under the present assumption that guilty verdicts are inevitable basically compromise rulings that allow the state to severely abuse its power to prosecute criminal activity.”

In the eight pages of the verdict, the judge discussed international trends, including the recommendations of the United Nations Human Rights Committee to provide relief to conscientious objectors and to release them from prison and the tolerance for conscientious objection shown by the EU Charter of Fundamental Rights and rulings by the European Court of Human Rights.

“There appears to be an increasing consensus among judges that South Korea cannot become an advanced country in terms of human rights until it resolves this issue. The Constitutional Court is promoting the establishing of a human rights tribunal in Asia, but it should start by getting in line with international human rights legislation,” said Oh Du-jin, the attorney who handled Kim’s appeal.

The first not guilty verdict by an appeals court on this issue is likely to put more pressure on the Constitutional Court, which will soon be ruling (perhaps before the end of the year) on the constitutionality of the section in the Military Service Act that provides legal grounds for prosecuting conscientious objectors.

In 2004 and 2011, the Constitutional Court upheld the constitutionality of the provision by a margin of seven justices to two. But despite these rulings, the issue has continued to receive steady attention since 2011, with seven courts recommending a constitutional review of Article 88 of the Military Service Act and conscientious objectors filing 22 objections during this period.