Korean society observed numerous state violences including civilian massacres, suspicious deaths, tortures, violences and missing people throughout the periods from the Japanese occupation to authoritarian regimes. While some fact-finding efforts on material human rights violation cases were made by the government, no follow-up measures to provide healing and rehabilitation for state violence survivors were conducted at national level.

Most of the detainees of May 18 Democratic Movement were tortured or maltreated. According to the survey conducted by the National Human Rights Commission of Korea in 2011, the prevalence of depression disorders among torture survivors were 4 times higher than the general public. Besides the family members of torture survivors were reported to have serious psychological pains due to interrogations, security observations and witnessing tortures.

In general, the victims of torture, maltreatment and other state violence experience not only physical damage but also severe mental pains. Besides the victims' family members are also subjected to PTSD.

Thus it was commonly agreed to the necessity to establish a specialized treatment center for state violence survivors (including those involved in May 18 People's Uprising) and their family members with PTSD. Gwangju Trauma Center was born from the consensus.

To conduct researches on torture and other state violence in terms of clinical, structural, legal aspects 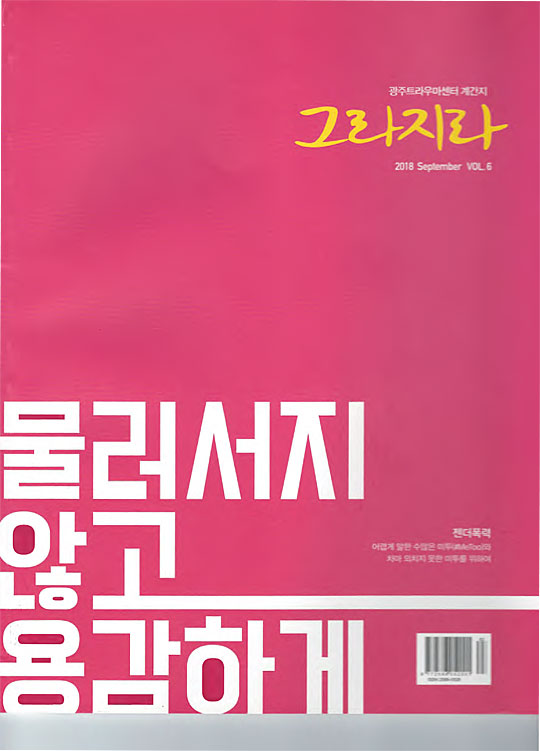 KIM Chan-Ho ist Leiter der Planungsabteilung des Trauma-Zentrums:
"... It is a very important process for community and society to provide safety and support to these survivors with psychological and physical healing as well as the human rights of the community. Therefore, I am responsible for the development of programs for improving consciousness and awareness of history, cooperating in domestic and foreign affairs, publishing magazines four times a year, teaching in or external visitors, and organizing international state violence trauma conference.... "

In diesem Jahr schloß er seine wissenschaftliche Arbeit an der Chonnam University in Gsangju ab:
The formation of ‘May 18 globalization’ discourse and process of change
- The case of Gwangju Citizens’ Solidarity in the 1990s

The ‘May18 Uprising’ which occurred in Gwangju in May 1980 provided a crucial moment for Korean society to change into a legitimate and democratic system. For instance, this case revealed the substance and the attributes of each citizen by resisting the anti-democratic oppression of the new military body which sought to revive the regime with subjective historical consciousness. Citizens who manifested the spirit of opposition and spirit of enthusiasm would eventually experience fundamental meetings and shifts in awareness in the existing contemporaneous national and social systems, as well as implementing an autonomous community. This acted in June 1987 as a driving force for the uprising, the workers’ struggle, and the direct presidential election.

Meanwhile, in 1993, the Kim Young-sam government announced the May 13 special talk and pursued the government-led ‘Develop a sacred memorial place for the May 18 uprising’ project. However, the project was conducted in a way led by the government and the city government (Gwangju city) contrary to the wishes of local civic groups. The Citizens’ Solidarity Group for the development of a sacred (holy) memorial place for the May 18 uprising (hereinafter referred to as the Gwangju Citizens' Solidarity group), which calls for public opinion and citizen participation, was launched in 1994. The Gwangju Citizens’ Solidarity group is centered around gatherings of civil society activists, and professional workers such as scholars and lawyers. After the discussion, they announced the ‘Master project for the development of a sacred memorial place for May 18 uprising’ and Gwangju City concurred with this new plan.

The Gwangju Citizens’ Solidarity group is noteworthy in that the democratic legitimacy and historical significance of the May 18 people’s uprising did not spread to other regions due to the traditional conflicted regional structure of the provinces. It was international solidarity for ‘May 18’ that caused its ‘globalization’. In other words, publicizing the May 18 uprising internationally and seeking cooperation with overseas democratic forces was always on the agenda of the group.

The Gwangju Citizens’ Solidarity group held international events every year, beginning with the ‘May 18 International Symposium’ in 1994. In 1998, the 『Asian Human Rights Charter』 was held to attract the ‘Asian Human Rights Charter Declaration Convention’, which was led by the Asian Human Rights Commission. This charter was enacted by 150 organizations in order to build human rights and peace in Asia. This is an actual direct result of ‘May 18 globalization’ that the Gwangju Citizens’ Solidarity group has pursued and the civil solidarity in Asia through human rights has become more concrete and increasingly cohesive due to such measures.

Auf die Frage, warum er diese schwere Arbeit überhaupt tue, welchenh Nutzen er davon habe, gab er zur Antwort:
I have been developing the May 18 commemorative projects for 15 years at The May 18 Memorial Foundation from 1999 to 2013. I was the first regular employee to be promoted from the new fresh employee to the secretary general as a middle manager, and then resigned later.

Then I started work as a team manager of research planning team at the Gwangju Trauma Center. The Center gave me three advantages. First, I had a psychological difficulty when I left the May 18 foundation, but I was able to heal by costaffs at the Center. Second, in the case of national violence, we realized the how much it is importance of social healing centering on victim 's healing in the case of criminal punishment and commemorative project's  development. Third, though the budget of the Gwangju Trauma Center is not relatively large, but we could concentrate more on developing meaningful activities on a small budget.

In addition, I was able to get a master's degree from a graduate school while working as a center, and I was able to do my own development as well. The trauma healing and rehabilitation of victims of national violence is an effort to personally restore the severed life of one person and to live a normal life again, and it is the last process to complete justice and democracy socially.